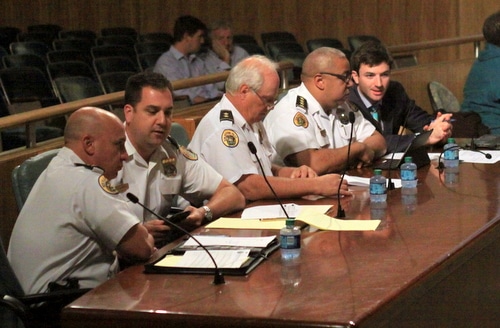 With armed robberies up four percent citywide this year — a point brazenly driven home by holdups at three recent Uptown restaurants — the New Orleans City Council said Friday they are ready to try nearly anything to help the police stop them.

In a special meeting of the City Council criminal-justice committee, the City Council members said that while they are concerned about crime trends in the city as a whole, the recent restaurant robberies have undermined residents’ sense of safety.

“The sense is that violence is around every corner,” said City Councilwoman Susan Guidry, opening the hearing.

At Guidry’s request, NOPD Superintendent Michael Harrison gave a presentation on the overall state of the police department. Many of the points he made — such as the high solve rates for armed robberies, the new program to reduce false-alarm calls, or the dozens of new officers who have been hired this year — were repeated from a news conference Harrison and Mayor Mitch Landrieu gave Monday, announcing the arrest of one Uptown armed-robbery suspect mere hours before the Monkey Hill robbery shocked the city again.

When Harrison concluded, the council members started with their own suggestions.

Some of the most aggressive questioning came from Councilwoman LaToya Cantrell, in whose district the Cafe Atchafalaya robbery took place.

Guidry concluded with her fear that the next restaurant robbery could devolve into a shootout sparked by an armed patron with a vigilante streak. Harrison agreed, noting that just because a person has a right to carry a weapon does not mean they have the training to use it effectively, or the judgment not to when they are outgunned.

“I would hate to be in a restaurant when someone decides to take on a robber, and instead could hit me or somebody else,” Guidry said.

Other than the media, the City Council chambers was nearly empty for the Friday-afternoon hearing. The lone speaker from the audience was Dyan French Cole, the activist known as Mama D, who questioned the flurry of activity over robberies when the murder count in the city is up by 15 percent — including a fatal shooting in her Seventh Ward neighborhood Friday morning.

“A 20-year-old died. He didn’t get robbed, he didn’t get his wallet taken,” Cole said. “He was murdered in my neighborhood this day.”