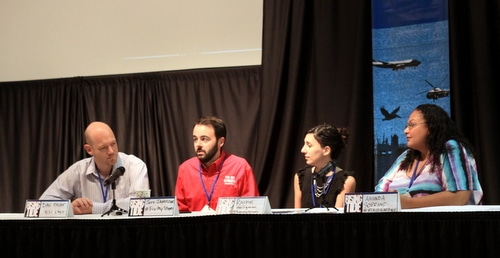 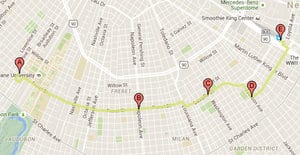 A map of the current Freret bus line (via norta.com)

After the new Loyola Avenue streetcar opened in 2013 just before the Super Bowl, the Regional Transit Authority clipped the end of the popular “Freret jet” bus line — in what public-transit activists describe as a prime example of the city’s increasing post-Katrina emphasis on transportation for tourists rather than residents.

Prior to the Loyola streetcar opening, the Freret and Martin Luther King bus lines were among the most direct lines running from Uptown to Canal Street. Now, however, the line stops at the Union Passenger Terminal just past the Pontchartrain Expressway, and riders who wish to continue on must wait for the streetcar to arrive, then pay 25 cents to transfer.

Consequently, ridership has decreased on the Freret bus line 42 percent “immediately,” said Rachel Heiligman of RIDE New Orleans, at last weekend’s Rising Tide conference. Some of those riders may now be going to the Claiborne line, she said.

“The bus is just no longer as useful to riders as it used to be,” Heiligman said.

“Streetcar expansion has certainly emerged as the big transit priority for the Regional Transit Authority,” Heiligman said, noting that a new North Rampart line is now under construction. “We have more streetcar trips being offered today than we did pre-Katrina, but we have just about a third of our bus trips.”

Amanda Soprano, a resident who described herself as dependent on public transportation, said she feels that the reduction in the two bus lines was specifically to boost ridership of the new streetcar, in spite of its inconvenience for riders.

“Their main goal from my perspective was just to make the Loyola streetcar look like it was worth the money they spent on it,” Soprano said.

Soprano, who lives in Hollygrove, said the long waits for the bus make even a simple trip to Walmart on Tchoupitoulas an entire day’s ordeal.

“I ride RTA every day of my life, and it’s emotionally and physically and psychically exhausting,” Soprano said, noting that she sometimes now spends the money for a much more expensive ride in an Uber car instead.

Heiligman said Soprano’s complaints illustrate the problems with the long waits between buses — it makes the service almost impractical for residents to use at all.

“I always say frequency is freedom,” Heiligman said. “The more frequent that your bus is coming, the easier it gets to use. So if you’re waiting 45 minutes for a bus to connect to another bus that also has a 45-minute wait, you’re in for a very long day of riding transit.”

A representative of the bus riders’ union said that the reductions in service cannot entirely be blamed on the city, as state funding for public transportation has fallen in recent years.

“State funding for transit here is abominable,” the union representative said during the panel discussion.

The service changes are overseen by a board of RTA commissioners, chosen by the mayor and City Council. The buses are actually operated by a private contractor — creating a misperception that the decision-makers are not publicly accountable — but Heiligman stressed that the RTA board meets in public and must take comment on every vote it takes.

The RTA board usually meets at 10 a.m. on the fourth Tuesday of every month at the RTA Facility at 2817 Canal Street. Heiligman said those meetings are the best way to influence public-transportation policy.

While bus service was a primary topic during the Rising Tide X transportation panel moderated by New Orleans writer Megan Braden-Perry, two other activists spoke about different aspects of getting around the city.

To watch the entire panel, see the video below: