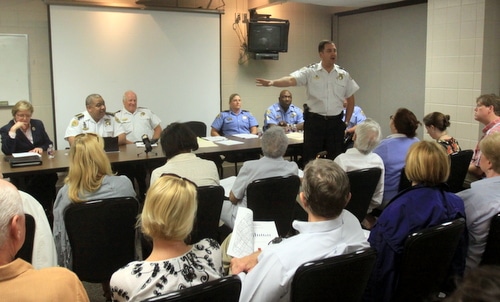 After an August that brought a number of armed robberies virtually unprecedented in recent years to the Uptown area, New Orleans police officials discussed a number of common-sense reforms they say will help prevent violent crime — but forcefully rejected recent calls for a return to a more aggressive “stop and frisk” style of policing.

The month of August alone drew 19 armed robberies, an unacceptably high number, NOPD Second District Commander Paul Noel acknowledged before a packed conference room at Touro Infirmary on Tuesday night. August, however, included a spree of robberies by a group of three teens and a man named Larry Vail now blamed for 11 cases, and it also included the brazen Aug. 20 robbery of the staff and patrons of Patois restaurant at the exact same time while police were preoccupied with chasing the teens associated with Vail.

Despite the repeated robbery sprees, Uptown police detectives have maintained a solve rate of more than 50 percent of armed robberies this year and in previous years — well above the 28 percent solve rate for the city or the 25 percent for similar-sized cities across the country, Noel said.

“The best way for me to prevent armed robberies is to put an armed robber in the penitentiary,” Noel said.

Enough officers?
Many of the dozens of residents at Tuesday’s meeting asked about staffing levels for the police force — especially in light of a delayed response time to the Patois robbery. Noel said he had dedicated all his patrol officers and detectives to responding to the first three robberies and the chase for the teens associated with Vail, and said four simultaneous armed robberies in a single district is a rare occurrence he hasn’t seen before in his policing career.

NOPD Superintendent Michael Harrison said the police force stands at about 1,150 sworn officers, down from a peak of 1,600 in years past. The department is aggressively recruiting new officers and those from other agencies, and hopes to complete three recruit classes by the end of the year, but given the normal rate of retirement and loss of officers for other reasons, the year-end total number of officers will likely be the same as it was when 2015 began, he said.

To create a net-positive, Harrison said, the department is passing raises and replacing equipment, making the department more attractive to newcomers and transfers, as well as to retaining existing officers. But ultimately, hiring police officers is a slow, complicated process, with background checks, medical and physical assessments, as well as the training — no matter how much the department tries to accelerate it.

“Even ‘really fast’ is a slow process from application to hire,” Harrison said.

City Councilwoman Susan Guidry said that the NOPD staffing budget is not the culprit, as the city has budgeted for nearly 1,250 officers this year.

“We have money sitting and waiting on these recruits,” Guidry said.

In the meantime, the Second District is working harder and deploying better than it did in the years when it had many more officers, Noel said, pointing to the reduction in armed robberies now from five or eight years ago.

‘Common sense’
Tuesday’s meeting was held in conjunction with the monthly community meeting that the Second District holds — normally at 6:30 p.m. every third Tuesday of every month at Touro Infirmary. Residents concerned about the armed robberies asked what they could do to make themselves safer, and Noel’s advice was very familiar for regular attendees of the NONPACC meeting.

“Stop and frisk”?
Just before the meeting concluded, one resident brought up State Treasurer John Kennedy’s recent call for a new plan policy primarily revolving around “an aggressive stop and frisk policy in New Orleans.”

Harrison quickly rebutted Kennedy’s idea as both uninformed and regressive.

“His background is in finance and money, and not in crime,” Harrison said.

Because of abuses of authority in the past, New Orleans police are operating under a consent decree that outlines guidelines for policing in accordance with citizens’ Constitutional rights, Harrison explained. Noel’s officers already have the duty to stop anyone they have a reasonable, justifiable suspicion of being involved in a crime. Likewise, the police should and do check anyone they believe to be a threat for weapons, Harrison — in other words, they already stop people and frisk some of them when there is grounds to do so.

But to simply “stop and frisk” everyone falls afoul of both racial profiling and the Constitutional rights against illegal search and seizure, Harrison said.

“We’re not teaching officers just to go out and stop and frisk people,” Harrison said. “Some stops lead to frisks, but every stop doesn’t. That’s only when we believe a person could be armed. That’s not automatic.”

After the meeting, Guidry said she concurs with Harrison’s explanation.

“The consent decree does not permit the kind of stop and frisk that I think Kennedy is calling for,” Guidry said. “There are many police tactics that pass Constitutional muster that are effective. I think he’s incorrect.”