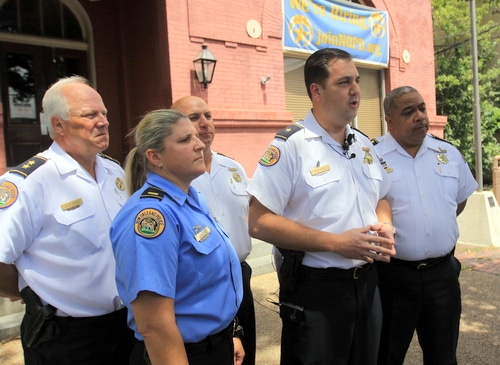 While armed robberies are spiking this year in the New Orleans Police Department’s Uptown-based Second District, officials says detectives are continuing to solve them at rates that exceed the national average — announcing on Tuesday the arrest of a third teen in a group now blamed for a total of 11 armed-robbery incidents in the month of August.

The 15-year-old’s name has not been released because of his age, but investigators say he was the suspect who escaped from investigators during the arrest of two alleged accomplices following a rash of three carjacking incidents Aug. 20. Members of the trio, along with 43-year-old Larry Vail in some cases, are now blamed for a total of 11 incidents throughout the month.

The teen was arrested Tuesday morning at a home in the 2900 block of LaSalle Street, and found “a chrome revolver, cell phones, license plates and stolen property inside the home,” according to a NOPD report on the arrest.

“We made a commitment to relentlessly pursue these individuals and bring them to justice and today we delivered on that promise,” said NOPD Superintendent Michael Harrison. “These teenagers targeted innocent victims throughout the Uptown neighborhood and threatened the safety of everyone around them. I commend the members of the Second and Sixth Police Districts for their solid police work in following every lead throughout this investigation and seeing it through to the end. We will continue to work aggressively every day to track down anyone who chooses to commit these acts of violence and bring them to justice.”

All three teens are charged in the following cases, according to the NOPD report:

Vail, the 43-year-old suspect, has been charged in connection with three of the robberies — the Aug. 9 carjacking on Laurel, the Aug. 11 beating on Audubon Boulevard, and the Aug. 13 carjacking on St. Charles Avenue. Police said Vail and the three teens were definitely working together, but they declined to elaborate on their relationship.

A number of recent robberies remain unsolved, however, such as the Aug. 20 robbery at Patois restaurant that happened at the same time as several of this group’s alleged robbery incidents, and a new spree of armed robberies over the weekend — Saturday’s carjacking on Laurel Street, Sunday’s robbery on Freret, and Monday night’s armed robbery at the Circle K. NOPD Second District Commander Paul Noel said, even as the prior investigation was concluding, his detectives were at work on the unsolved cases.

Second District detectives have solved more than half of the robberies reported this year, Noel noted, a clearance rate more than twice the national average.