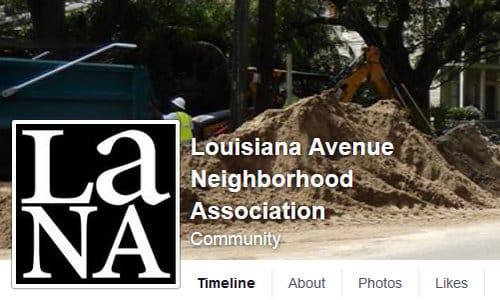 With construction of a major new drainage canal on Louisiana Avenue slated to last at least until 2018, neighbors are rallying with a new online association dedicated to monitoring and reporting safety problems up and down the corridor.

Barely two weeks after its creation, the Louisiana Avenue Neighborhood Association has already attracted 64 members to its Facebook page. The association has no meetings or membership fees, said organizer Claudia Lynch — they simply want to become a central place to report problems associated with the construction of the new SELA drainage canal where everyone can publicly monitor progress correcting them. Anyone can join it by clicking “like,” and anyone can post issues, she said.

“People can post any dangerous situations they see,” Lynch said Wednesday night, introducing the project at a meeting of a more traditional civic group, the Faubourg Delachaise Neighborhood Association. “That’s really gotten to be the thrust of this — keeping it safe.”

The idea for the online association was born after Lynch started trying to bring officials’ attention to problems she observed herself, but realized like she would get faster results if more residents banded together. Residents already posting on the page have described issues from as simple as improperly placed traffic barrels and “Road Closed” signs — complicating an already difficult driving situation — to more complex, such as murky water from faucets near the construction site.

Lynch has communicated at length with the city Department of Public Works and the U.S. Army Corps of Engineers about the creation of the page, she said, and they have agreed to monitor it as well. Their efforts have already come to some fruition, Lynch said. When residents reported a large unprotected hole on Louisiana Avenue near Coliseum, it didn’t take long for a fence to appear around it afterward. The hole may not have been fixed — and more will surely appear — but at least it is now safer for passers-by, she said.

“We’ve gotten a lot of action out of them already. They’ve cleaned up almost all of the sand and gravel that was so slippery and dangerous,” Lynch said. “They’ve really done a lot. … I think it’s going better than anybody could have expected.”

“The whole goal is to expedite the process,” Lawson said.