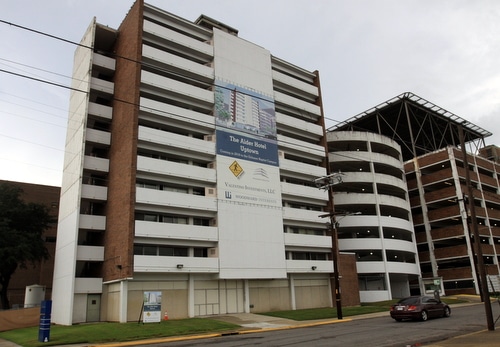 The building at Magnolia and Cadiz is slated for renovation next year into the Alder Hotel next to the Ochsner Baptist campus. (Robert Morris, UptownMessenger.com)

A developer who has quietly spearheaded the redevelopment of many of Freret Street’s most prominent commercial buildings and a French Quarter hotelier are teaming up to transform a vacant building next to Ochsner Baptist into a new 10-story hotel, they announced to neighbors this week.

At the corner of Magnolia and Cadiz, the Alder Hotel will feature 90 rooms primarily marketed to families of patients at the hospital, said Greg Ensslen of Go Mango Neighborhood Restoration and Michael Valentino of Valentino New Orleans Hotels as they unveiled the plans to the Freret Neighbors United group on Tuesday.

The 50-year-old building has been out of service since 1995, Ensslen siad. While Ochsner still owns the building and controls the lease on it, the hotel will be operated by Valentino’s family business, which also includes five other hotels in the French Quarter and Central Business District, such as the Hotel Ste. Marie and the Lafayette Hotel, the developers said.

The hotel does not include plans for a restaurant or a bar, Ensslen said, and the rooms will each have their own kitchen and private balcony, suitable for long-term stays for families making use of the specialized services at the Ochsner campus, such as its neonatal intensive care unit. The hotel will also serve the remainder of Uptown as well, such as parents or alumni visiting the university area, as Valentino noted that the area upriver of the Garden District is severely underserved by hotel rooms. Rates will be around $150 per night.

Parking will initially be served by an Ochsner-owned surface parking lot across the street, Ensslen said. If Ochsner decides to build on the surface lot at some point, then the hotel parking will move into the Oschner garage — “nothing on the street,” Ensslen said.

The developers plan to host job fairs at the monthly Freret Markets, and said they want to hire as many employees as possible from the Freret neighborhood, Valentino said. When asked about a community-benefits agreement to put those promises in writing, Valentino said he would be happy to discuss that with the neighborhood.

“We intend to hire as many people as we can from across the street,” Valentino said. “Our target employment group is the neighborhood.”

Ensslen said that the project has been in discussion for years, but that the lease with Ochsner has only just recently been signed, and that Neighbors United was the first group to learn of it. While some residents expressed concern at the introduction of such a large new facility into the neighborhood, Neighbors United president Stan Norwood reassured them that it only represents new life for a building that is currently standing empty.

“This building is already here,” Norwood says. “This is a renovation of a building that’s already existing.”

They hope to start construction in the spring of 2016, and open by the end of the year, Ensslen said. No zoning changes or land-use variances are expected to be necessary, and they will not be seeking any taxpayer money for the project, though they will apply for historic-renovation tax credits.