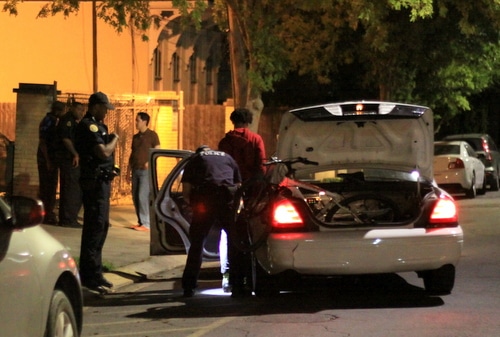 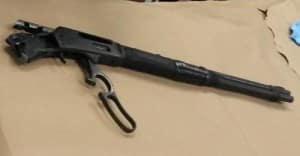 The gun recovered at the suspect’s home. (via NOPD)

It wasn’t a shotgun; it was a lever-action rifle — but New Orleans police found the long-barreled weapon stuffed into a folding-chair bag exactly as witnesses described in the rash of five Uptown robberies this month now linked to a 16-year-old arrested Friday night, authorities say.

Officers from the NOPD Second and Sixth districts were deployed all around the area of Napoleon and Prytania on Friday night, when Second District Officer Everette Route spotted a 16-year-old near Chestnut and General Pershing who resembled the security photo obtained by the week before — short dreadlocks, riding a bicycle. Route tried to stop the teen, but the boy instead began pedaling down a one-way side street where Route couldn’t follow, NOPD Superintendent Michael Harrison said in a news conference Monday afternoon.

NOPD Sixth District Lt. Nick Gernon said the teen’s attempt to flee was suspicious, because officers had stopped a number of other people already Friday night who were aware of the robbery spree and grateful for the police presence.

“We had been making a lot of stops back there, and most people knew why we were out there,” Gernon said. “They were thanking us.” 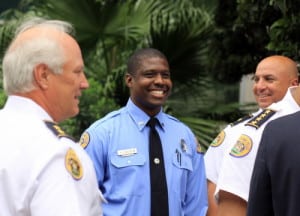 Sixth District Detectives Walter Edmond and Anya Hilliard picked up the pursuit and followed the boy into a nearby parking lot where they stopped him, assisted by more officers who arrived moments later. When they searched his pockets, they found he had a revolver, and a search warrant of the boy’s last known address in the 3600 block of Earhart Boulevard turned up five cell phones and the lever-action rifle in a folding-chair bag, Harrison said.

The teen — whose name has not been released because of his age, though he will be prosecuted as an adult — is charged in five robberies, Harrison said:

Harrison and Mayor Mitch Landrieu used the news conference announcing the teen’s arrest to quell perceptions that New Orleans is at “a tipping point of violence”, particularly after two brazen Uptown robberies of Patois and Cafe Atchafalaya restaurants within a month’s time. While they continue an aggressive recruiting program to try to rebuild the force after years of dwindling ranks, they are also implementing new programs to increase the number of patrol hours for officers on the street — such as cutting down on false alarms and freeing up officers on administrative assignments.

Harrison declined to say if or when the NOPD would be able to rebuild the individual police district’s proactive task forces intended to prevent robberies and violent crime, saying that all the department’s resources (including the centralized task force) work together for crime prevention. Overall crime is down 8 percent citywide, Harrison and Landrieu said.

“Our officers are not retreating. They are continuing to run toward the danger every single day,” Harrison said.

Detectives from the Second and Sixth districts have made 14 armed robbery arrests in 19 cases in September, Harrison said, and Friday’s arrest is another example of why their solve rates far exceed those in similar cities around the country.

“They worked around the clock,” Landrieu said. “They acted quickly to get the suspect off the streets.”

The late evening hours when the long-barreled gun robberies took place coincide with the hours worked by the relative the boy lives with, Gernon noted. With a pistol in his pocket as he cruised the area of his previous robberies, the teen was likely looking for his next victim when Route spotted him, Gernon said.

“He was out there hunting,” Gernon said of the teen. 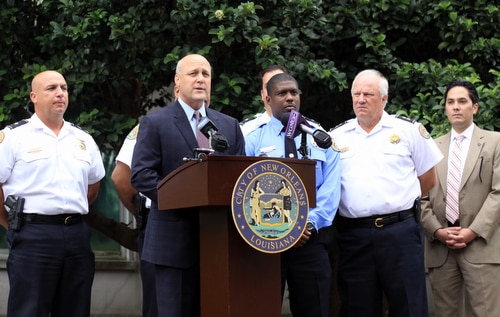 To read our live coverage of the news conference, see below.