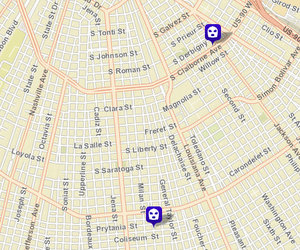 A man in his 50s was robbed Saturday night on South Claiborne Avenue, and a woman in her 30s was robbed on Marengo Street a few hours later, New Orleans police said.

Around 9 p.m. Saturday, Sept. 5, a man was near Philip Street and South Claiborne Avenue when two armed men “jumped out of a dark colored vehicle, pulled a gun on the victim and went through his pockets,” according to the initial NOPD report. “The subjects fled with $360 and a debit card.”

Around 11:20 p.m., a woman was in the 1300 block of Marengo Street when she was confronted by a man with a gun, according to the report in that case. He ordered her to get on the ground, then took her belongings, the report states.

Further details were not immediately available in either case. Anyone with information is urged to call the NOPD Sixth District station at 658-6060 to speak to a detective, or CrimeStoppers at 822-1111 to leave an anonymous tip that could be eligible for a cash reward.