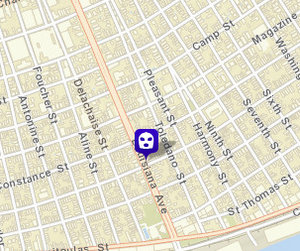 Two men broke through the locked door of Irish Channel restaurant Cafe Atchafalaya to rob the customers and employees at gunpoint Thursday night, police said, in a case perhaps even more brazen than the robbery of Patois near Audubon Park a month ago.

Around 9:45 p.m. Thursday, Sept. 24, the manager of Cafe Atchafalaya at 901 Louisiana Avenue saw two men approaching the restaurants wearing Velcro masks and dark hooded sweatshirts, according to a NOPD report on the incident.

“Believing their intentions were to rob the restaurant, the manager said he quickly locked the front door,” the report states. “The suspects then began kicking and shoving the door until it opened.

“When the suspects entered the building, they produced handguns and moved through the restaurant demanding property from employees and customers inside,” the report continues. “After taking money from the cash register at the bar, the suspects fled the location on foot toward Laurel Street.”

No one was harmed in the robbery, and police detectives are now seeking surveillance footage from security cameras around the area, the report states.

On Aug. 21, three men robbed the patrons of Patois in the 6000 block of Laurel Street in similar fashion, while investigators were preoccupied with a spree of simultaneous but unrelated carjackings. Police recovered evidence for DNA testing and released surveillance videos in that case, but it remains unsolved, and police have not said whether they believe Thursday’s case was the work of the same men.

Anyone with information on the Cafe Atchafalaya case is urged to call the NOPD Sixth District station at 658-6060 to speak to a detective, or CrimeStoppers at 822-1111 to leave an anonymous tip that could be eligible for a cash reward.

One thought on “Atchafalaya restaurant employees, customers robbed by gunmen”