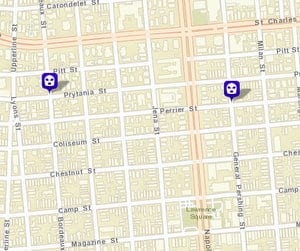 Around 10:10 p.m. Friday, Sept. 18, a man and a woman both in their 30s were walking in the 5000 block of Prytania Street when a man with a gun confronted them, according to the initial NOPD report. The gunman demanded the man empty his pockets and took the woman’s purse, then left, the report states.

About two minutes later, a 30-year-old woman was near General Pershing and Perrier streets when a man with a shotgun confronted her, according to the report in that case. He demanded her purse, then left on a bicycle, the report states.

Police have not said whether the two cases are connected. Anyone with information is urged to call the NOPD Second District station at 658-6020 to speak to a detective, or CrimeStoppers at 822-1111 to leave an anonymous tip that could be eligible for a cash reward.

One thought on “Armed robberies reported on Prytania Street, Perrier”