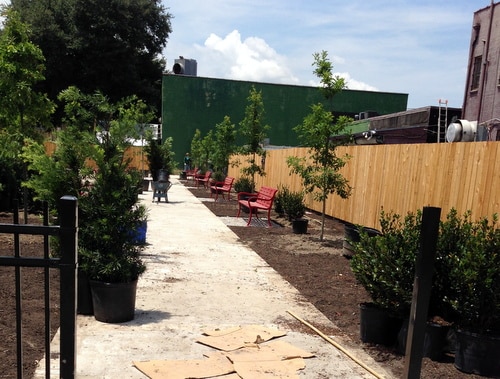 Ecole Bilingue is developing a formerly vacant lot at 820 General Pershing into a school garden. (submitted photo by Faye Lieder)

For years, neighbors and preservationists fought to save a century-old home at 820 General Pershing Street from the wrecking ball, and despaired when it was finally demolished late last year.

But instead of the commercial parking lot they once dreaded, the vacant lot is instead becoming a school garden for the nearby Ecole Bilingue de la Nouvelle-Orléans, and neighbors say they are unexpectedly pleased by its appearance.

The slow demise of the house at 820 General Pershing took place across several years, several private owners and a number of at-times contradictory decisions by a variety of city bureaucratic entities, one of which no longer even exists. After it was finally approved for demolition in 2014 amid concerns about the legality of the city’s historic-preservation laws, the property owner had to sign a good-neighbor agreement to transform it into a private garden, though residents viewed the move as a stealthy attempt to clear the land for a parking lot for the businesses on Magazine.

The lot sat vacant and overgrown for several more months until this year, when it was sold to a new owner who donated its use to Ecole Bilingue. Ecole Bilingue was already renovating the former St. Henry’s rectory next door into a classroom and office building to be known as Fabian Hall, in honor of school founder Julie Fabian, school officials said at the time.

Now, with the dedication of Fabian Hall scheduled for Saturday, the garden is taking shape as well. It will be used by Ecole Bilingue’s elementary and middle school students, and secured and fenced in when it is finished, said Andrew Lapeyre, chair of the school board.

“While it is not for public use, we believe it will complement the neighborhood,” Lapeyre said.

While neighbors still regret that the century-old home could not be saved, they were full of praise for the school’s development of the lot.

“That (saving the house) didn’t happen – but we now have a lovely green space in its place!” wrote Julie Graybill of the Faubourg Marengo Neighborhood Association, which opposed the demolition. “It still is much nicer to have this green space for the school’s children rather than the empty overgrown lot!”

“It really is becoming a garden and a lovely one at that,” said neighbor Faye Lieder, who also led efforts to save the house. “Never expected anything this nice would happen.”

City Councilwoman LaToya Cantrell, who oversaw much of the debate about 820 General Pershing, praised the outcome as well.

“The hard long work to find common ground on 820 General Pershing was worth all the effort it took,” Cantrell said. “Now we have a small beautiful green space providing respite from the busy Magazine Street corridor.”