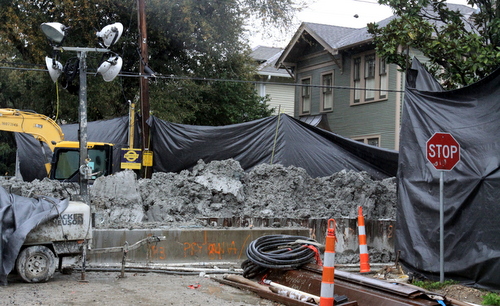 A section of the construction site on Prytania Street, photographed in February 25. (Robert Morris, UptownMessenger.com)

Nearly 150 property owners have now joined the lawsuit seeking damages from the Sewerage & Water Board of New Orleans related to the construction of major drainage canals through the Uptown area, while the agency is now casting blame for the problems on two of the contractors on the projects, legal documents show.

“Ten years after Katrina, the Plaintiffs are horrified to now find their homes and businesses, often newly renovated or refurbished, in the midst of another disaster,” the property owners’ attorney wrote in a recent court document. “…Delayed years beyond original dates of completion, their homes and neighborhoods are being wrecked by the project. They are being forced to live in damaged homes and pay for their own repairs, for years and years with no end in sight.”

The initial lawsuit was filed in May by three families represented by California attorney Michael Whitaker, alleging that construction of the Uptown drainage canals had damaged their homes, and that the Sewerage & Water Board is required by law to pay for the repairs. The lawsuit specifically did not allege any negligence by the U.S. Army Corps of Engineers or its contractors, but instead simply said that the damage itself is an illegal taking by the government under the legal principal of “inverse condemnation.”

Further, Whitaker has argued, the S&WB already set aside money to pay anticipated damages, and those payouts will reduce the total amount the S&WB owes back to the federal government for the SELA drainage projects.

In early July, the S&WB filed an initial response to the lawsuit, denying the residents’ claims. Instead, the S&WB says that if the property owners suffered any damage, then it was caused by pre-existing conditions of poor construction.

“The sole and proximate cause of any such damages and injuries was the negligence, imprudence and want of skill of Plaintiffs,” the S&WB response reads, specifically blaming faulty maintenance, defective construction, poor soil conditions and lack of precautionary measures by the homeowners to prevent damage.

“If Plaintiffs prove their claims true, then B&K and Cajun exceed the vibration limit during normal operation, and the excessive vibrations were caused by their failure to properly discharge their contractual obligations to comply with these specifications,” the S&WB response reads. “… B&K and Cajun are liable to the SWB because they failed to adhere to the contract specifications wherein they were required to employ every precaution to prevent damage to Plaintiffs’ properties.”

B&K and Cajun did not return messages seeking comment from Uptown Messenger on Thursday.

Because B&K and Cajun’s contracts are with the U.S. Army Corps of Engineers, the lawsuit was automatically moved to federal court July 30, where the contractors may have some immunity, explained Whitaker, the property owners’ attorney. Whitaker, however, is seeking to remand the property owners’ case against the SWB back to state court — where no proof of negligence is needed, only damages — and sever the SWB negligence claims against the contractors into a separate case.

The same facts and legal theories that resulted in a judgment against the SWB for damage to homes along the Broadmoor section of the SELA project 10 years ago apply to the SWB now, Whitaker writes, arguing that the property owners’ claims are likewise against the SWB, not the federal contractors.

“Callously indifferent to Plaintiffs’ plight, the SWB has ignored its decade-long history of damaging homes using these same methods, and refuses to take steps to protect the Plaintiffs’ homes and businesses despite their pleas for assistance,” Whitaker writes. “Defying logic and compounding the misery, the SWB has determined to conduct the enormous project simultaneously on the four major avenues crossing Uptown. This has created a disaster for the Plaintiffs and their fellow neighbors.”

In a status meeting with property owners Wednesday night at the Columns Hotel, Whitaker said that more than 140 property owners have now joined the case. A provision of Louisiana law allows any plaintiff over the age of 70 to bring their claims to trial within 90 days, Whitaker said, so once the case is remanded back to state court, he will use those property owners’ claims as test cases, to try to bring the entire lawsuit to a swifter resolution.

A call to attorney Craig Mitchell, who represents the SWB, was not returned Thursday morning.