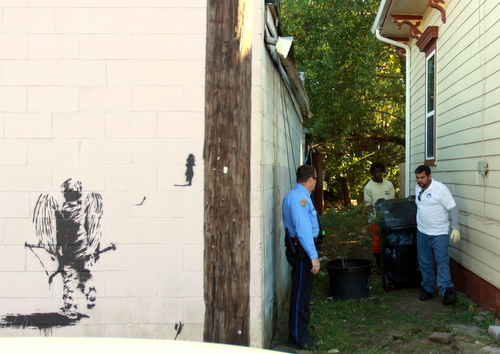 New Orleans police take a trash can into evidence (after the body of a woman found in it was removed) from an alleyway off Danneel Street on Nov. 26. (UptownMessenger.com file photo by Robert Morris)

Around Thanksgiving of 2014, police made the gruesome discovery of a woman’s body stuffed into a Central City trash can. While the neighborhood mourned the outgoing woman’s death, observers also noted the presence of a cryptic image on the wall near the Danneel Street alley where her body was stashed, a Cupid-like angel watching a figure walk away from arrows that missed.

Not too long afterward, officials at the Lycee Francais charter school were in the process of completing their purchase of the former Priestley campus in Carrollton, more than three miles away, when they noticed a politically charged mural on the old gym. “May the Police Force Be With You,” the stencil read, with an image of Darth Vader force-choking a man being held by police officers.

Like those who saw the image at the murder scene, the Lycee Francais officials wondered among themselves: Was it a Banksy? 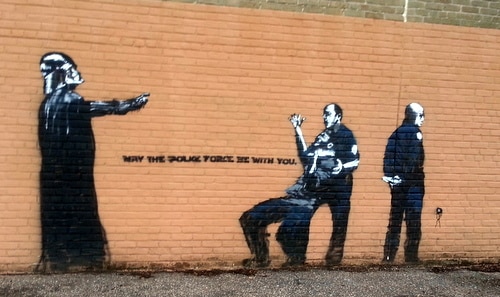 A politically-themed stencil on the side of the Priestley gym, by a street artist known as ‘Az.’ (Robert Morris, UptownMessenger.com)

The answer, it turns out, is no, not at all.

In fact, the artist is not even trying to pass his work off as Banksy’s — he signs each piece with his adopted name, “Az,” and has a website showcasing it, Azwashere.com. He also has been featured at local galleries, including Treo and Gasa Gasa, and, in light of the ongoing confusion about his art, agreed to discuss it with Uptown Messenger.

“I was living up in Fargo, and I was so bored that I wanted to make the place look not so much like a stereotypical suburban city,” Az said.

One night, when he was spraypainting the word ‘freedom’ on the back side of an apartment building, a passer-by took note of his license plate. With that, Az got his first attention from the police, and left Fargo soon afterward.

New Orleans, he said, has become a place of “refuge” for him, and he no longer wants to move around. Instead, he and artist Rex Dingler are collaborating on a project called “Not Jericho,” a sort of Craigslist to connect artists with property owners who have walls they want painted.

“New Orleans has been so against murals and graffiti in general, now that they are starting to want more public art, they’re having a hard time finding the artists,” Az said.

That tide may have turned earlier this year, however, with the #ExhibitBe public-art project started by artist Brandon “BMike” Odums. Not only was the transformation of a former Westbank apartment building into a three-story canvas hailed as one of the most successful art projects in recent memory, but Odums was invited to share the stage with Mayor Mitch Landrieu during this year’s Martin Luther King Jr. Day celebrations, and his murals have since shown up at major city events with increasing frequency.

Az said he has met Odums a few times and discussed a collaboration, Az said, though they haven’t been able to work it out yet. He applauded the citywide attention keeping Odums so busy.

“Every ounce of it is deserved,” Az said. “The man is doing amazing things.”

Several of Az’s pieces, including a humorous depiction of Bigfoot making fake human footprints, are on the walls at Gasa Gasa on Freret Street. He was also one of five street artists showcased in a recent exhibit at Treo on Tulane Avenue in Mid-City.

“I think he’s brilliant. I think he’s very talented,” said Pauline Patterson, owner of Treo and Finn McCool’s. “It’s very methodical, very professional — so many layers. I really do like his style of work.” 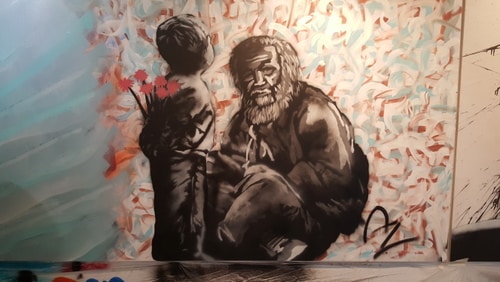 One of the pieces created by Az for a street-art exhibit at Treo gallery in Mid-City. (via azwashere.com)

Thus far, however, much of the public discussion of Az’s work has revolved around whether it was done by the internationally-known artist Banksy, who worked in New Orleans after Hurricane Katrina.

“Obviously, there’s always going to be the comparison to Banksy,” Patterson said. “He’s just using a similar sort of outlet to express his political beliefs.”

Az said his own work has stylistic differences from Banksy’s. Az’s stencils often have more layers than Banksy’s, he said, and they depict human faces differently, especially in the amount of detail around the figures’ eyes.

Az said he doesn’t view the public’s confusion as a negative. The fame around Banksy’s work has made people more likely to consider the message of street art on its merits, rather than simply dismissing it as vandalism, he said.

“I don’t mind it, because first and foremost, I do like Banksy. I love his work, I really do,” Az said. “But I do put my signature on it, so if you look closer, there’s no way you can mistake it for a Banksy.”

His themes range from the visual puns, like Bigfoot at Gasa Gasa, to more explicitly political topics, such as the parallel between the evil Darth Vader and police violence on the Priestley building.

Keith Bartlett, CEO of Lycee Francais, said school leaders noticed it almost immediately after the closing of the P.3 international art exhibitions in New Orleans, and thought that Banksy might have been in town for that. If it was one of his, Bartlett said, they were already discussing how to preserve it.

But even knowing that it is the work of another street artist, Bartlett said the school has no immediate wish to see it removed.

“It certainly speaks to what’s in the mindset of our society today,” Bartlett said. “I also don’t want to disturb it because it probably speaks to the neighborhood. To just cover it up would almost be disrespectful to their voices or their minds.”

Az acknowledged that most of his work has been around the greater Uptown area, though he has done some pieces in the Marigny/Bywater as well. He scouts potential locations on Google Maps and Streetview, then goes in person to observe for 20 minutes or so, to determine how likely it is he would be disturbed while working.

On Danneel Street, however, that preparation had eerily unexpected consequences. He had only finished painting the angel with the ignored arrows a week or so before the discovery of the woman’s body. First, he feared that someone might try to connect him to the crime. Then he began to wonder whether his image may have been somehow meaningful to the person who killed Mona Fedison — especially given that investigators now say the arrested suspect, Evangelisto Ramos, was in an occasional relationship with her.

Nor could he ignore, Az said, the obvious parallel that he and the killer probably chose the spot to commit their crimes for the same reasons, that it was secluded and not necessarily likely to attract immediate attention.

Now that he is in New Orleans, Az said his days of moving from city to city are over. With the growing interest in street art, he said he hopes to continue taking his work on a path that is less likely to lead to run-ins with the police. Further, he is now a father, and just celebrated his son’s first birthday.

“I’d like to bring him up around here, now that I think about it,” Az said. “I’d love to have the culture of this town instilled in him from birth.”

His work may also be mistaken for Banksy less often, he said. He has been experimenting with a new technique using paint balloons instead of spray paint that creates a dramatically different effect.

In the meantime, property owners may wonder what they should do if an “Az” shows up on one of their walls. Patterson, the Mid-City gallery owner, said she wouldn’t like a randomly scrawled name on her building either, but that she would prize a work of genuine street art.

“It would depend on what it was,” Patterson said. “If it was Az, I’d probably want to put a frame around it and capture it forever.” 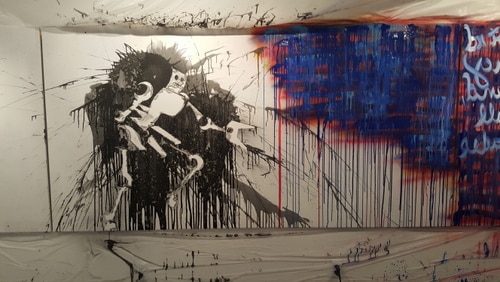 “Scorched Earth Program,” an example of Az’s more recent experimentation, on display at Treo gallery in Mid-City. (via azwashere.com)