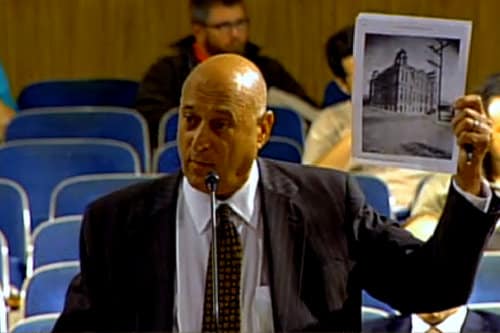 Attorney Rick Richter holds up a picture of the former McDonogh No. 8 building that was on the vacant land now at 3139 Constance Street, arguing that it represents the large-scale development that should be allowed there. (photo via nola.gov)

A small plot of land on Constance Street in the Irish Channel long mistaken for a pocket park should be developed into single-family or double houses, not the condo building that the owner wants there, said New Orleans city planners on Tuesday.

Prior to Tuesday’s meeting of the City Planning Commission, owner Ruppert Kohlmaier had seemed to have the wind at his back in his plans for a condo building on his property at 3139 Constance Street. City officials were forthright about the bureaucratic error that had led the land to be mislabeled as a park years ago, and City Councilwoman LaToya Cantrell had asked the commission to consider multi-family residential zoning for the property instead, the “most intense” use deemed possibly reasonable at the site.

At an at-times contentious meeting with the Irish Channel Neighborhood Association, recently, Cantrell had explained that she saw multi-family as a starting point for the discussion — the City Planning Commission was not allowed to recommend a higher zoning than that use, but it could recommend downward from it. Just before Tuesday’s meeting, the staff apparently did just that — recommending zoning for two-family houses on the site rather than a multi-family development — creating unexpectedly tough odds for Kohlmaier.

Attorney Rick Richter said the planning staff’s recommendation creates its own problem: the three lots on the property are slightly too small for standard two-family homes, meaning Kohlmaier will have to return to the city yet again for another whole set of variances.

“You can’t develop a double,” Richter said of the three lots on the property.

About 10 neighbors then spoke in turn, each suggesting that individual homes on the site would be more in keeping with both the properties immediately around the lot and the rest of the Irish Channel. Resident Chris Reed said he worries that Kohlmaier’s proposal could encourage a “domino effect” of other developers trying to build larger complexes further into the Channel.

Ben Sherman, who lives across Constance from the property, said that slightly-smallish doubles are actually quite common around the Channel. A multi-family development, he said, would be a glaring deviation from that pattern.

“If I opened up my front door, it would be a solar eclipse, 24 hours a day,” Sherman said.

Several residents, including Harvey Stern of the Irish Channel Neighborhood Association board, described the previous use of the property, even by Kohlmaier’s father, as a “de facto park,” with its landscaping, benches and walkways. One reason the association now supports the two-family home proposal, Stern said, is that if it can’t remain an actual green space, then it should retain as much greenery around the individual homes as possible.

“To the extent that we are a resilient city, these little neighborhood parks contribute to it, particularly with their tree canopies,” Stern said.

In his rebuttal, Richter said the whole conversation distorts the original history of the property as the large old McDonogh No. 8 school, and he held up a photo for illustration.

“This was elegant,” Richter said, arguing that if the school hadn’t burned, it would be converted today to a multi-family residential structure with more than six units. “This was the scale of this neighborhood.”

Further, he reiterated that the resulting lots will be too small for two-family homes. They will likely have to be singles, and one will be in the shadow of the Design Within Reach building.

The members of the City Planning Commission showed no interest in deviating from their staff’s recommendation, however. Commissioner Alexandra Mora said that she regrets the city’s past zoning errors, recognizes Kohlmaier’s right to build on his land and understands the challenges involved in developing such an irregular-shaped property, but that the two-family homes are the best zoning for the land now.

Robert Rivers, the planning commission director, noted that through a resubdivision or other planning efforts, the property can be developed to take advantage of the two-family zoning.

“Because a lot is substandard doesn’t mean it can’t be built on,” Rivers said. “It doesn’t preclude development on that particular property.”

With that, the commission voted 8-0 in favor of the two-family zoning. It will next go to the full City Council for a final decision.

A few other Uptown zoning items were also on Tuesday’s agenda:

7 thoughts on “Constance Street “park that’s not a park” should be houses, not condos, city planners say”