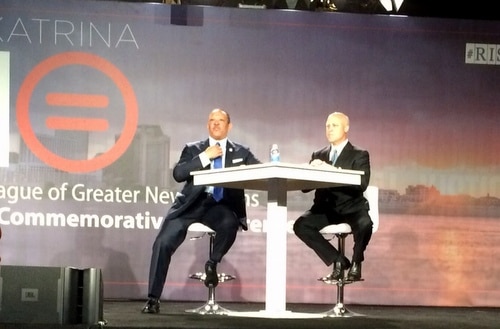 For many New Orleanians life has never been the same since Hurricane Katrina destroyed their homes, their neighborhoods, their schools, and their sense of community. Katrina was an experience they do not want to relive on this or any other anniversary. For them, the grief process is ongoing. African Americans especially feel the rules were stacked against them, making their recovery even harder.

What do we remember most about Katrina? The kindness of strangers and the extraordinary efforts by some to help others in need. Danae’s evacuation to Arkansas with five dogs. Allan’s cat Alexander surviving the storm in his Lakeview home. Latino recovery workers sending money home through Western Union. Cleaning out and later restocking numerous refrigerators. Listening to acoustic music by candlelight at the Banks Street Bar. Searching Lamar Dixon for lost pets. The curfew and the eerie silence.

We were lucky. We owned our homes and our business. We had insurance as well as personal resources. We were able to rebuild and thrive. Would Danae and Allan be here today if we had been renters or public housing tenants when no units were available? If we were unemployed at the time of the storm or worked in a profession where jobs vanished? If the Road Home had underpaid us? If we had been swindled by a contractor or been forced to move by a landlord who realized he could double the rent?

If we had relied on Charity Hospital, how would we get health care? If we needed mental health services for a friend or member of our family, where would we find a bed? If we were supporters of traditional neighborhood schools and now through One App only cross-town charter schools with new teachers were available, how could our children thrive?

At the National Urban League’s Katrina 10 conference which opened yesterday, former Mayor Marc Morial told the audience that New Orleans is at “half-time” in the Katrina recovery process. “It’s time to take inventory, to assess how people feel (about) what their services are” with the hope that a truthful assessment would “set the tone” for what is needed in the future.

“New Orleans as a city cannot go forward unless everyone is going forward with it,” he said. Katrina and Rita did not cause all of New Orleans’ problems but put a magnifying glass to them, and quantified them all, Morial explained.

Simply put, Morial believes that economic inclusion by creating training opportunities and jobs, especially for the 52 percent of African-American males in our community who are unemployed or under-employed is a big key to New Orleans’ future success. “The rising tide can lift all boats,” said Morial, but not if people never made it to the boat.

Morial and Mayor Mitch Landrieu pointed to major economic development projects in New Orleans such as the new healthcare facilities and the upcoming billion-dollar rebuild of the city’s drainage system as unique opportunities to provide jobs for New Orleanians, especially minorities. Low-income tourism industry jobs are not enough. African-American women and men are often forced to work two jobs just to sustain their families.

“The City belongs to everybody,” Landrieu commented. On our best days, he said, New Orleans sees herself as a “gumbo,” Morial’s favorite phrase during his tenure. Katrina hit at the worst time for New Orleans, Landrieu continued. “What the people did was heroic. We are still standing.”

As New Orleans continues to rebuild, institutional changes in policy are necessary to foster economic equality and bring all the minority groups — African-Americans, Asians and Latinos — into our melting pot to create a stronger tide that can lift any boat.

We are all Katrinaed-out. We are having sleepless nights remembering everything that happened 10 years ago. We will attend several more Katrina commemorative events not because we want to but because we owe it to those no longer with us. As a community, we’re ready to move forward and not look back.

Join us at Dickie Brennan’s Steak House on Friday for Meals for Recovery. Brennan’s chefs there and at the Bourbon House will be serving $10 dishes similar to what they prepared immediately after Katrina. Proceeds will benefit organizations that helped during the recovery.

One thought on “Allan Katz and Danae Columbus: A rising tide can only lift the people in the boat”