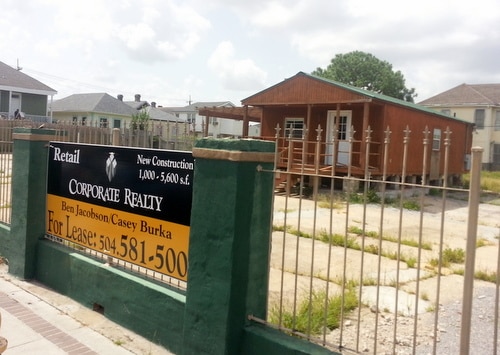 The Freret Garden Center is now for lease, after its longtime owners decided to sell the property and move the business to Broadmoor. (Robert Morris, UptownMessenger.com) 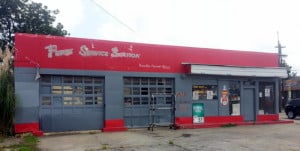 Nearly six years ago, James Carville famously told Anderson Cooper on Hurricane Katrina’s fourth anniversary that “A little bit of a sense I have is how Freret Street goes, how goes New Orleans.”

At the time, Carville was speaking to all the optimistic signs of the city’s recovery — the reopening of storefronts that had long been shuttered, the return of longtime residents and the arrival of new ones. His words, however, remain just as poignant today — when Freret Street has become such prized real estate that some neighborhood and startup business owners have closed their doors, while new, deeper-pocketed investors line up to take their places.

Four Freret businesses have announced their closings in recent weeks. Three of them were African-American owned, and two have operated in the neighborhood since long before Hurricane Katrina and its subsequent recovery.

The first to close was the biggest, Freret Garden Center, which traces its lineage back two generations to Weber Garden Center, which opened in 1970s as a pioneering black-owned landscaping business. Today, the large lot on the corner sits completely vacant, with a “For Lease” sign suggesting the myriad possibilities for what it could become.

Thea Marvin, granddaughter of the business’s founder August J. Weber and co-owner with her brother, said they sold the property because of ongoing ownership issues with their extended family, and because they kept getting offers on the lot. The siblings plan to reopen in Broadmoor in the fall, Marvin said.

“We figured it was just time to do it,” Marvin said. “I would have loved to stay on Freret Street forever.”

Note: This article was reported in partnership with Gambit and appears in the newspaper’s print edition this week.

Freret Service Center, where the hand-painted sign boasts “Good Old Fashion Service,” abruptly closed its garage bays for the last time at the beginning of June. Pat Shelby, who said the property has been in her family for 50 years, said she is not yet sure what she plans to do there next, but doesn’t plan to sell the old building and would prefer to keep it intact.

“I like the nostalgic look,” Shelby said. “I’m going to save as much as I can with that look.”

Jaques Clothing, a boutique for men that opened a year and a half ago, announced that it would be moving following a “Summer Melt Down” sale June 13, and is now empty. Jordan Barlow, who has been tattoo artist with 15 years in the business in New Orleans, plans to open the Abracadabra tattoo parlor there next month.

Finally, Daniela Zapata has also announced that Full Blossom Chic, her consignment boutique for women with curves open since summer 2013, would be closing at the end of July. Foot traffic on Freret Street remains as high as ever, but Zapata said that Full Blossom simply couldn’t attract enough of it to justify remaining open.

“It’s just slow. We’re staying afloat, but just barely,” said Zapata, who now plans to return to school for an advanced degree in counseling. “We would rather close before we start losing.”

Zapata speaks warmly of the reception she received when she opened in what had been a long-vacant storefront two years ago — she had even planned to move to the neighborhood from Gentilly, though could never find a home she could afford to rent. As she prepares to close her doors, she said she feels the neighborhood changing again.

“I don’t want to say that it’s not going to be small-business friendly,” Zapata said. “But I do feel like the neighborhood feeling of it is no longer here.” 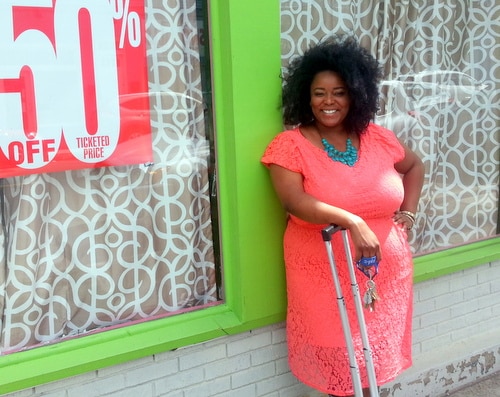 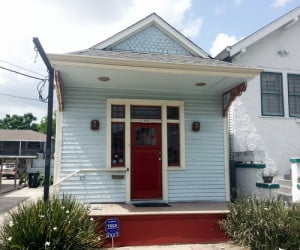 The building that housed Jaques Clothing Boutique for the past year and a half is slated to become a tattoo parlor. (Robert Morris, UptownMessenger.com)

Whereas the Freret renaissance of a few years ago consisted of entrepreneurs opening in buildings that had long sat vacant, those opportunities are mostly gone, so the next wave of investment will primarily replace businesses that were already operating. Richard Campanella, the well-known Tulane University geographer and author, said this pattern is common in cities across the country as communities transition from “weak” markets to “strong” markets.

“I think it is quite safe to say that the patterns of gentrification emergent in 2013, four to five years after the dismal ‘recovery’ narrative of the early post-Katina years began to transform to the heady ‘renaissance’ storyline of today, have only spread and intensified, both citywide and in the Freret area,” Campanella said in an email to Uptown Messenger. “The inner historic core of New Orleans, from Bywater through the Quarter and CBD along the riverfront and Uptown, Freret, Carrollton, Bayou St. John and MidCity — plus parts of the Lakefront and Lakeview — all exhibit the characteristics of a strong housing market, with all the affiliated implications of high costs of living, rising rent, gentrification, social transformation, and lack of affordable housing.”

The initial investment in Freret Street — the first new restaurants, the first abandoned homes restored for new families — was almost universally praised. But that success, largely from business owners with roots in the neighborhood, attracted ever more attention from others, and now has a different feel.

“It’s not just Freret Street that’s changed a lot; it’s five or six blocks on either side. All that’s changed,” Marvin said. “A lot of older black people who owned houses, they didn’t come back. People just kept going in there in flipping them. It’s not a bad thing, but older people just can’t afford the property taxes anymore.”

Some housing prices in the city’s most sought-after neighborhoods seem to be reaching a relative plateau, increasing at a more natural, gradual rate, Campanella said he has observed. The pattern of rapid increase recently observed in areas like Freret, the Carrollton riverbend, the Marigny and Bywater, and Mid-City is now spreading into nearby neighborhoods, suggesting a future New Orleans that is wealthier at its core and poorer at its edges.

“I expect this to continue, although not necessarily at a constant rate. Spatially, I predict it will spread into neighborhoods that are (1) perceived to be historic, interesting, walkable, or otherwise culturally and structurally desireable, and (2) adjacent to areas already seeing reinvestment, or that had never suffered divestment in the first place,” Campanella said. “On the urban and suburban periphery — that is, in New Orleans East, St. Bernard Parish, nearly all of the West Bank, and most of East Jeff — housing remains relatively afforable if not flat-out cheap compared to nationwide standards. This being the case, we should expect to see more of the trend that has been going on for a number of years: working-class and lower-to-middle-class families shifting outwardly, in a centrifugal pattern, while wealthier households, particularly young professionals and empty-nesters, moving inwardly in a centripedal shift.” 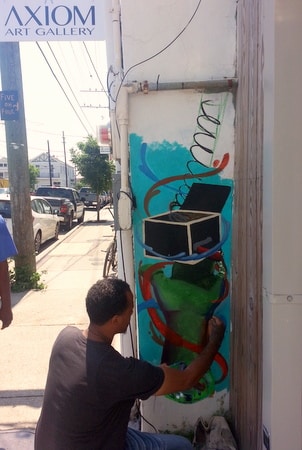 The businesses on Freret have thus far remained predominantly local, with the stalwart Domino’s the only chain on the corridor, though a chain yogurt shop is planned for the new development planned at the former Frank’s Steakhouse site. The change in ownership is not simply from black to white, either: Among the new businesses on Freret Street are some that are owned by African-Americans, such as Axiom Art Gallery and Ice Cream 504, and other notable commercial properties remain owned by black families.

Greg Ensslen, a developer who has been renovating properties in the Freret area for decades, said that he is sorry to see neighborhood fixtures close that have long been the “identity of Freret.” But he said the corridor remains diverse, and many other well-established businesses will find a way to thrive amid the increased values on the corridor.

“It is sad to see these long-time ones are going, but it is opening up an opportunity for new ones. I think they’ll also create a legacy for Freret,” Ensslen said. “These are all business people making their own effort, and I’m grateful for all of them.”

It remains to be seen, however, if more businesses open that serve the people already in the neighborhood — like a grocery, or a laundry — or if the new ventures continue to seek out the most profitable customers. While excessive focus on who owns what can be a “shallow way of thinking,” Stan Norwood of Dennis Barbershop said, it is more important to judge the businesses on how well they integrate into the people that already make up the neighborhood.

The loss of longtime local businesses, for example, results in the loss of jobs for their employees who live nearby — and there is no guarantee that they will be seen as desirable hires by the next owners.

“The sense of comfort, the sense of welcoming, it’s not there,” Norwood said. “It’s changed, but in a different way. I still want to remain optimistic, because there are a lot of things going on that are successful. But is that success inclusive of everyone?”

This kind of change on Freret Street is obviously better than that of prior decades, Marvin noted. Her grandfather was able to buy the parcel fronting on Freret because the owners of the fried-chicken restaurant there wanted to leave after they were robbed so many times.

The change happening now, Marvin said, is simply the price of progress.

“It’s not like people were bullied out. They just couldn’t afford to live in their houses any more,” Marvin said. “I’m glad that the area is picking up. It’s just sad that a lot of people are gone that will never come back.” 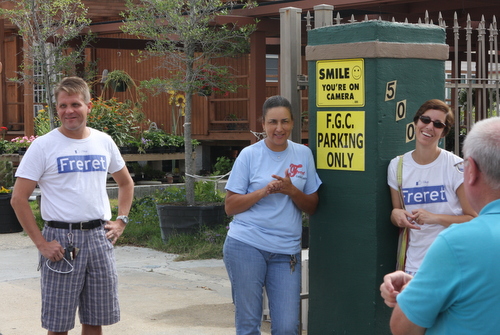 Thea Marvin, center, speaks to a neighborhood walking tour about the history of her family’s business, Freret Garden Center, in May 2012. (UptownMessenger.com file photo by Robert Morris)