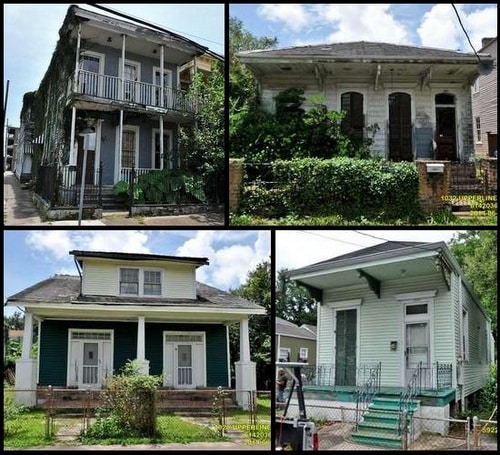 The houses at (top row) 1600 Carondelet and 1032 Upperline, and (bottom row) 1020 Upperline and 5922 Patton were all discussed by the Neighborhood Conservation District Advisory Committee on Monday. (graphic by UptownMessenger.com; images via City of New Orleans.)

When the dust settled, the Neighborhood Conservation District Advisory Committee rejected one demolition request on Upperline Street outright, cast a split vote on a parcel next to it, and postponed two more requests on Carondelet and Patton streets. All four properties, however, will ultimately receive a final decision from the City Council, which has also repeatedly become embroiled in the citywide implications of this same debate.

“Every two weeks we now see another more modest cottage or building in the Uptown area that’s been cherry picked and deemed not worthy of existing, with people deciding that they have to be replaced with larger and new structures,” said NCDAC member Eleanor Burke. “The cumulative effect of this is going to be a very different landscape.”

Carondelet Street
The first house to be scrutinized by the NCDAC on Monday was at 1600 Carondelet Street, a two-story home last used as multi-family housing a block off St. Charles Avenue at the corner of Terpsichore.

The owner, a company called Tiger Ho LLC, wants to tear down the house “because its foundation is beyond repair,” and replace it with a new, similarly-used building, said Carolyn Gill-Jefferson, an attorney for the owner.

Burke, however, said that the building had formerly been under the jurisdiction of the Historic District Landmarks Commission, and that she had knew it had been repaired at times in previous years.

Gill-Jefferson replied that those repairs were done by another party in an unsuccessful attempt to assume ownership of the building.

That suggests, Burke said, that the building was at one point stabilized, and the present owner allowed it to deteriorate again. Why should the current owner be rewarded with permission to demolish it? Burke asked

No one is seeking any reward, Gill-Jefferson replied, but the property needs to be demolished in the interest of public safety.

Ultimately, the committee voted to defer a decision on 1600 Carondelet so that the owner could provide the a structural engineer’s report about the condition of the building.

Upperline Street
Following Carondelet Street, the committee took up two related requests for demolitions at 1020 and 1032 Upperline Street. The owner, Ken Flower, lives at the end of the block, and bought the two houses after the previous owner recently died, said George Hopkins, an architect presenting the demolition request.

Although the previous owner lived in one of the houses, they have both long been neglected and fallen into disrepair so severe that they cannot be saved, Hopkins said. The two lots represent about 120 feet of frontage on Upperline — equivalent to the three normal-sized lots across the street — so the owners want to tear the dilapidated homes down and build three new ones in their place.

“The impetus for the acquisition of these properties is to improve the neighborhood,” Hopkins said, emphasizing that the owners will live literally next door to what they build. “We’re cleaning up the block.”

The house at 1020 Upperline is a particularly poor example of any architectural style, Hopkins said. While the house at 1032 Upperline is farther gone, the owners are willing to save the facade and as many other elements from inside as they can for use in the house that replaces it. He noted that a number of immediate neighbors have offered their support for the demolition as well.

The request brought a number of members of the preservation community in opposition, as well as some other neighbors. Stephanie Bruno, a noted local author and preservationist, sent a letter to the committee arguing for preservation of the house at 1032 Upperline while allowing new construction of the other two homes.

Patty Gay, director of the Preservation Resource Center, said her organization has restored historic homes on General Taylor Street that have fallen down. Meanwhile, she argued that smaller homes have a place in Uptown alongside large ones.

“There’s so much complaint about the high prices of properties,” Gay said. “Let’s save the modest houses. Let the more expensive houses go somewhere else.”

Danielle Del Sol, who teaches preservation at the Tulane School of Architecture and works for the Preservation Resource Center, and Hilary Irvin, a former architectural historian with the Vieux Carré Commission, also spoke against the demolitions.

Hopkins, however, said that he is more familiar with the structural issues of these houses than the opponents, and that his 40-year career in architecture and the books he has written are all a testament to his expertise in restoring historic homes whenever possible.

“This house is a very sick house. We know what we’re talking about,” Hopkins said of 1032 Upperline. “Those houses are a blight on the neighborhood.”

The NCDAC voted 6-3 to reject the demolition of 1032 Upperline. It voted 5-4 on a motion to reject the request for 1020 Upperline, which is technically a split vote that sends the matter to the City Council without a recommendation.

The house suffers from termite damage and water leaks, and the neighbors on the other side are concerned it is in danger of falling down, Schroeder told the committee.

The Audubon Riverside Neighborhood Association, however, sent a letter to the committee requesting that they reject the request. Based on their research, the house was built between 1883 and 1895 — more than 120 years ago — and the association said demolishing it contributes to a precedent of tearing down viable historic homes.

The commission voted to defer the issue, so that Schroeder can provide interior photos, meet with neighbors, and further consider potential for its repair. Patti Gay from the Preservation Resource Center was also signed in to speak on the Patton Street property, but declined to after the deferral was announced.

Similar debates have played out before the NCDAC just in the last two months over demolition requests for homes on Eleonore Street, Octavia Street, and Soniat Street. Burke said that the pattern developing by those requests and those heard on Monday call into question the purpose of the NCDAC, which she described as to preserve the city’s historic homes.

“I think that we need to seriously consider what this body is here for, what our criteria are,” Burke said. “Is it to allow for demolitions for new construction of larger homes whenever they’re desired, or is it to protect the fabric of the historic district that we’re here to serve?”

City leaders are already grappling with those same issues. The City Council has already voted to begin exploring expanding the jurisdiction of the city’s Historic District Landmark Commission farther around Uptown and into Mid-City, though the Uptown portion of that process has stalled until Mayor Mitch Landrieu names nominees for a study committee.

Ultimately, Landrieu envisions the NCDAC as a temporary solution until the HDLC can become the sole agency overseeing historic structures for much of the city, said Sarah N. McLaughlin, a spokeswoman for Landrieu. The study committees will determine the best boundaries for the HDLC to be expanded to, and then the NCDAC will be phased out.

“By eventually eliminating the NCDAC, we are eliminating a layer of bureaucracy for many neighborhoods and making the process more efficient,” McLaughin wrote in an email to Uptown Messenger Tuesday afternoon.

“We are in favor of partial HDLC review for demolitions in the NCDAC areas that are already designated as federally designated historic districts,” McLaughlin continued. “HDLC has a professional support staff, while NCDAC has no professional or technical staff. These proposed changes will help the City more effectively protect and preserve historic buildings important to the fabric of New Orleans and expedite blight reduction where appropriate to get properties back into commerce and strengthen our neighborhoods.”

Note: This article was updated at 4:45 p.m. with additional comment from Mayor Mitch Landrieu’s office.