A rendering of the renovated home by draftsman Stephen Perkins. (via City of New Orleans) 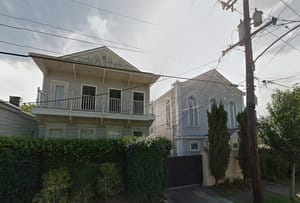 The proposed bed-and-breakfast is located at 3100 Laurel Street and 830-842 Eighth Street.

The site consists of three lots with two interconnected two-story buildings. One side of the building, at 830 8th Street, contains the owner’s residential quarters with 3,000 square feet of floor area. The other side of the building is located at 3100 Laurel Street and is used as a gallery, work, and storage space with nearly 5,000 square feet of floor area, according to the application.

The owner, Dr. Tlaloc Alferez, plans to use three out of four of the bedrooms in the site for guests of the bed and breakfast and use the remaining one bedroom for the owner’s use. In a letter to neighbors, Alferez notes that he has lived there for 30 years. 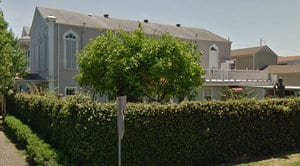 According to the application, the site contains a sculpture garden, pool, a carport, and a driveway for two off street parking spaces.

A 7-foot high fence is along the property with two entrance gates for vehicles, according to the application.

The City Planning Commission staff recommended the proposal for approval with provisos such as re-subdivising the three lots into one lot, and only permitting that food be purchased from a “food seller (caterer or bakery) and served as is or warmed at the facility,” as food shall not be prepared for guests on site, according to the staff report.

The City Planning Commission unanimously approved the proposed bed-and-breakfast, sending it to City Council for the final decision.