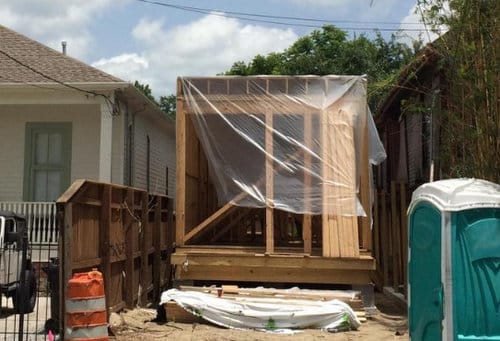 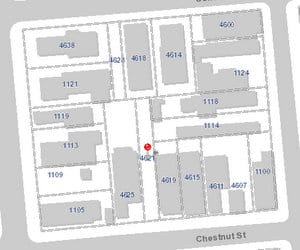 The city’s property maps show the narrow lot at 4621 Chestnut Street. (via City of New Orleans)

A 12-foot-wide house planned for Chestnut Street was recently granted approval to continue construction despite the objection of a number of nearby neighbors.

The developer, Logistics Park LLC of New Orleans, is planning a two-story home for the lot at 4621 Chestnut Street. The house would be 12-feet, 10-inches wide, 65 feet long, and 28 feet tall, for a total floor area of approximately 1,500 square feet.

The lot itself measures 21 feet across, nearly half the 40 feet normally required, but the city granted a construction permit was granted back in March because “a single-family lot can be developed on by right” under usual circumstances, said Leslie Alley of the City Planning Commission. However, city officials did not notice that the lot at 4621 had been commonly owned with the neighboring lot property until just last year, Alley said, which means a variance should have been required.

When neighbors pointed out the prior common ownership of the neighboring lots, a hearing before the Board of Zoning Adjustments was triggered for Monday, July 13, and a stop-work order was issued in the interim.

“Right now we’re shut down and experiencing some weather damage, so we’re hoping to get this process rolling again,”
Contractor David Kaufmann of Slidell told the board.

Anne Raymond, representing the developer, told the board that the lot width dates back nearly a century.

The hearing, however, brought a number of neighbors in opposition.

“The neighbors are vehemently opposed to this project,” said Susan Drogin, who lives on Coliseum Street on the back side of the property. “We do not want it deferred. We want it denied.”

Justin Chopin, who lives on the Valence Street side of the block, said the lot is too small to be independently developed, and the developer should have known that when they bought it.

“They had to do so knowing it was never going to be conforming to the zoning regulations,” Chopin said. “There’s not ample parking. It doesn’t fit with the construct of the other houses.”

Lorraine Neville, husband of Art Neville, said the lot was always part of the neighboring home as a side yard.

“I know this to be true: It was never an independent lot,” Lorraine Neville said, noting that she had a letter signed by 15 adjacent neighbors opposing the construction.

The board, however, said that the developer appeared to have properly followed the process laid out by city officials, even though the city erroneously applied the law. Board member Tommy Screen said that he sympathized with the neighbors’ concerns, but that the developer’s property rights should not be constrained by whether the neighbors liked the design of the house.

“Developers by their very nature are not evil people. They clearly are in America and can make a living and develop things whether neighbors are opposed to it or not, if they follow the rules,” Screen said. “In this case you’ve got someone who came in, and as the result of an error in the process laid out by the city, work was begun, and now we’ve got two sets of people in a lurch. Sometimes life’s not fair, I guess.”

After verifying the March permit issued by the city, Board of Zoning Adjustments chair Todd James concurred with Screen, and the board voted to approve the staff’s recommendation to allow construction to proceed.