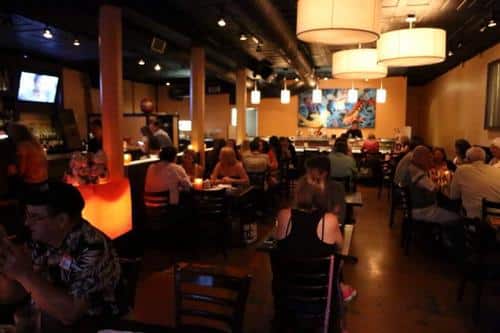 Attendees of the Maple Street Dishcrawl in July 2014 sample the fare at Little Tokyo, a Japanese restaurant in a space occupied by a college bar just a few years ago. (UptownMessenger.com file photo by Zach Brien)

Whether you call it a “crackdown” or a “cleanup,” there is no doubt that Maple Street has changed dramatically over the last five years amid intense scrutiny by New Orleans city officials.

Now, a debate over whether the City Council should continue to have oversight over whether new restaurants on Maple Street are allowed to sell alcohol has split the neighborhood association and local businesses, with residents on both sides.

Is the City Council’s traditional role as a gatekeeper for alcohol sales at restaurants a crucial element of the new peace on Maple Street, or does it give neighborhoods and their elected officials too much influence over which businesses can open?

After her election in 2010, City Councilwoman Susan Guidry was immediately inundated with complaints about the behavior around the college bars on Maple Street, said her staff member Enrico Sterling, who showed the City Planning Commission a video of large crowds of young people congregating there in October of that year. Guidry was unambiguous in her response to the bars, telling them to either “comply or close,” and the results quickly followed.

Two college bars — Rocco’s and T.J. Quills — were raided by state alcohol agents in early 2011, and city officials forced both to sign strict operating agreements in order to stay open. Each has now changed its name under new ownership — T.J. Quills to the Annex and Rocco’s to Redd’s — and Redd’s raised its age of entry to 21. Another bar, The Doors, fell under similar scrutiny, and became a Japanese restaurant in 2012.

Over the same period, a wave of new restaurants opened, including Satsuma, Ba Chi Canteen, The Sammich, Waffles on Maple and even Jimmy John’s. During this time, one of the controls on alcohol sales on Maple Street was that any restaurant that wanted to sell drinks must apply for a “conditional use” from the City Council.

The proposal drew the strong support of the Maple Area Residents Inc. neighborhood group, which has vocally opposed many of the alcohol sales on the corridor, and equally strong opposition from the Maple Street business owners.

David Keiffer, an architect who lives just off Maple Street, said the majority of the businesses on Maple are converted residences, and show a developmental pattern towards alcohol-serving establishments because of the “captive population” of college students nearby. If alcohol sales are allowed at restaurants by right, he said, those businesses will be able to pay higher rents and will begin displacing the other diverse shops that service the neighborhood.

Jerry Speir of the Carrollton Riverbend Neighborhood Association said he worries that the regulations on alcohol-serving restaurants are being stripped from the new Comprehensive Zoning Ordinance, which could threaten Maple Street further. Oak Street, he noted, has never had problems as severe as those in the Maple Street video, because it is farther from the universities, Speir said.

“We have 20,000 students within blocks of us, and they tend not to respect the neighborhood when they drink,” said nearby resident Shawn McKee.

Peter Ricchiuti, a business professor at Tulane and nearby resident, said the conditional-use process helps maintain the balance on Maple of businesses that serve the neighborhood. If more alcohol establishments are suddenly allowed, he predicted, the city will lose more in property taxes from devalued homes than it will gain in sales taxes.

“The benefit is that you screen these businesses before they come in,” said Keith Hardie of Maple Area Residents Inc.”You make sure they have limitations on them so they are appropriate to the neighborhood.”

Sherif Sakla, owner of Babylon Cafe and president of the Maple Area Business Association, blasted that screening process as discriminatory. If certain people don’t like a business for any reason, Sakla said, they can prevent it from the opportunity to sell alcohol and compete with other businesses indefinitely.

Todd Slack, a property owner of the building where The Sammich operates, said that the conditional-use process cost him nine months of operation and thousands of dollars, and that was without having to hire an attorney for it. Meanwhile, Slack argued, the regulations for alcohol-serving businesses under the new CZO will actually be more stringent than the provisos he had to agree to in his conditional use.

A number of other neighbors argued against the overlay and for ending the conditional use process as well, saying that better enforcement — not the conditional use process — was responsible for cleaning up the neighborhood. Ronnie Seaton, a former White House chef whose family operates Willie Mae’s Scotch House on St. Charles Avenue, praised the business climate on Maple and said the business owners work to keep it clean.

“When you get property owners who care about Maple Street, who follow the rules, you get no complaints,” Slack said.

The planning commissioners strongly sided with the business owners.

“The neighborhood has to be very vigilant with these businesses when they open. Enforcement has to be the key. You want to get the council offices out of the business of being the gatekeepers for what business gets to open,” said Nolan Marshall III, who offered the motion to reject the overlay and allow the alcohol sales. The council offices should focus on correcting known problems instead, he said. “That’ll be more helpful to neighborhood than trying to figure out who’s a good operator in advance.”

“The concern about taking that approach is that we don’t know the adequacy of any given neighborhood association,” Mitchell said. The CZO, he said, gets the council “”out of the politics of who is entitled to have what where.”

With that, the planning commissioners voted 6-0 to reject the Maple Street Overlay and allow alcohol sales by right on the corridor under the new Comprehensive Zoning Ordinance. Their recommendation, however, will now return to the City Council for a final decision.