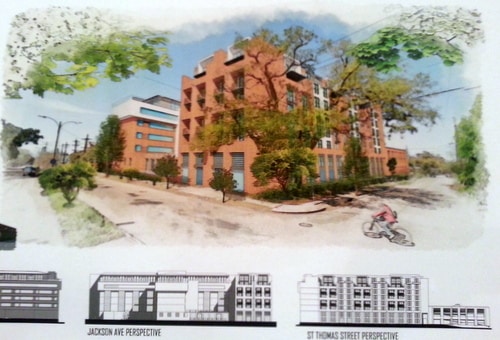 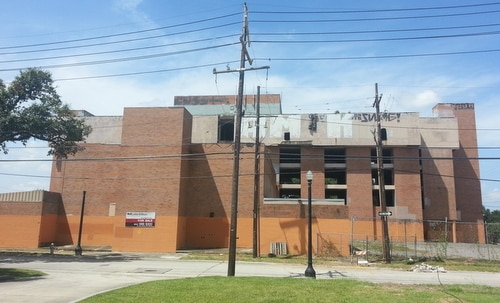 The Sara Mayo Hospital at 625 Jackson Avenue was first built approximately 100 years ago, but its original buildings were mostly replaced in the 1960s, and it has been vacant since some time in the 1980s, Smith said. Numerous issues surrounding the ownership of the building stymied its redevelopment for years, but a group of investors led by the Kailas Company bought it from a lender in late 2014, said Denise Gaines, a representative of the company.

The development group now plans to retain the structure of the former Sara Mayo hospital, but add windows to the exterior and renovate the interior to hold 17,500 square feet of commercial space on the ground floor and seven floors of one- and two-bedroom market-rate apartments above that, architect Harry Baker Smith told residents in a community meeting on Friday morning. Developers will add rooftop amenities to the building — such as a pool, a garden or other recreation opportunities — but the project will not exceed the 75-foot height limits already imposed by the city on the site, Smith said.

“This building is very solid,” Smith said. “It’s a concrete frame, and we propose to use all the existing structural components and some of the exterior components.”

The ground-floor commercials space is primarily limited by zoning laws to restaurants, including coffee shops, and office spaces — but not retail, Smith said. It is too early to say what types of restaurants would seek space in the building, but Smith said the developers would prefer local restaurateurs and that he doubted fast food would be a good fit.

“I don’t see us doing fast food, other than a coffee shop, which I think would be needed,” Smith said.

“A nice-size one-bedroom is what the market is demanding,” Gaines said.

“They’re not overly large units, but they would be good for single people or married couples,” Smith said, noting that elderly residents might also find the complex attractive. He added, “Inside, we’re going to have granite counter-tops, hardwood floors, all the things you would have in a high-scale, market rate apartment complex.”

They will also add a parking structure to accommodate a total of 375 off-street parking spaces, and have named the project the Jackson Oaks, Smith said. The parking figure is based on 1.5 spaces for every apartment, and 60 additional spaces for the commercial tenants, he said.

The project will also remove some pavement for green space and landscaping, which will increase the property’s stormwater management features, Smith noted in response to one resident’s question.

“We will have more open space than exists there right now,” Smith said. “What’s there now will be improved.”

The property currently has “general office” zoning, and the developers will be asking the city for Mixed-Use Planned Community designation, Smith said. They have already begun discussing the project design with the City Planning Commission, he noted.

Smith said he expects the total redevelopment to take around two years to complete.

“We want to incorporate the same quality furnishings into every project we do,” Gaines said.

The developers plan to seek state historic tax credits for the project, but not federal tax credits, Smith noted.

The residents who attended Friday’s meeting at the Jackson Avenue Evangelical Church Community Center primarily focused their questions on specific details related to the project design, such as parking, the types of commercial tenants expected, the environmental impact, with a few remarks of general approval and none in outright opposition. Representatives of the Irish Channel Neighborhood Association and the Coliseum Square Association, both of which border Jackson Avenue, asked the developers for more meetings that can be attended by more of their members, and Smith agreed to make as many presentations as necessary.