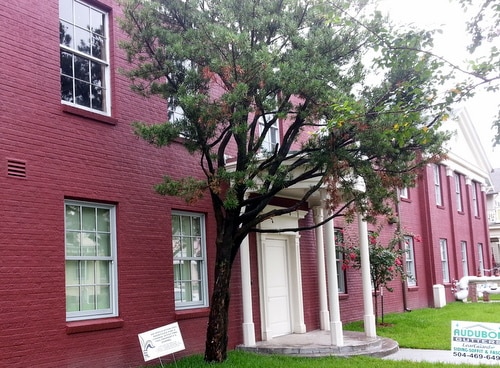 The My House building at 2010 Peniston Street. (Robert Morris, UptownMessenger.com) 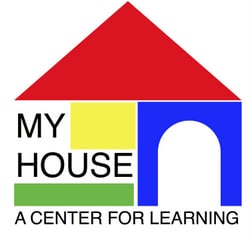 A facility that served the children and families of the Milan neighborhood for decades on Peniston Street until Hurricane Katrina is now finally nearing its reopening, 10 years after the storm, officials said.

The My House Center for Learning was originally known as the Sellers Home for Unwed Mothers, a Baptist ministry that traces its origins back to 1899, and that organization constructed the 18,000-square-foot Peniston Street building in 1955 with dormitories upstairs, a nursery and other residential features. Over the years, the organization focused more heavily on providing educational services for its residents’ children — such as after-school programs, especially those focused on science — and in 1992 became My House, ending its residential services altogether.

“My House was actually born as a byproduct of the original intent of the building,” said board president Sarah Busch.

Damage from the flooding that followed the levee breaks closed the facility after Hurricane Katrina, and only after eight years of negotiations with FEMA was MyHouse able to obtain a $2.3 million grant for renovations in 2013, Busch said.

Now, the renovation and construction is mostly complete on the building, Busch said, though a prospective tenant may want to move some walls to make some of the first-floor rooms bigger. The second floor will remain a shell for now, Busch said, while My House focuses on resuming operations on the first floor.

“Many times we thought we were just going to give up, but we didn’t,” Busch said. “We’re so happy to be coming home.”

Because more schools now host their after-care programs on campus than at satellite locations, My House plans to shift its focus slightly to early-childhood education. The organization is now in final negotiations with a prospective tenant to operate the programs that Busch said will be a strong fit for both the My House mission and for the neighborhood’s needs.

“We would be thrilled to have them,” Busch said. “It would be such a tremendous asset to the neighborhood.”

Only one other hurdle remains. The property is zoned residential, and the City Council enthusiastically granted My House a conditional use to operate as a community center in 2013, after the FEMA grant was awarded. That permission, however, turned out not to be sufficient for the early-childhood functions that My House plans, so the organization has now applied with the City Planning Commission to modify that conditional use “to allow school and childcare use.”

Nearby neighbors have watched the sometimes-slow progress at the building for years, and were initially concerned to see the signs noting a zoning change, said Jennifer Nero, who lives across the street.

“When we saw activity, we really thought it was going to be an apartment building, and we thought ‘Uh-oh,’ because there’s no parking,” Nero said.

Learning that My House was actually returning to the building was a relief, Nero said. She had family members who attended some of its after-school programs, and she said she fondly remembers seeing children from other nearby schools arriving or lining up for outdoor excursions.

“It was a great place,” Nero said. “I remember they did nature walks, and they had a little parade. It was nice to see the kids come and be dropped off, excited to be going there. The kids weren’t troublesome. They came and did their work and they left.”

In addition to its science programs, My House was also known for its GED classes and its summer camps, all of which the organization hopes to restore over time, Busch said. Most importantly, the program had strong roots in the neighborhood, Busch said, and she is excited to see it so close to reopening.

“It’s amazing how many people in the neighborhood were somehow affiliated,” Busch said. “Whether their kids went through, our they taught there, there have been so many success stories.”

One thought on “After 10 years vacant, My House seeks to reopen large Peniston Street child-care facility”