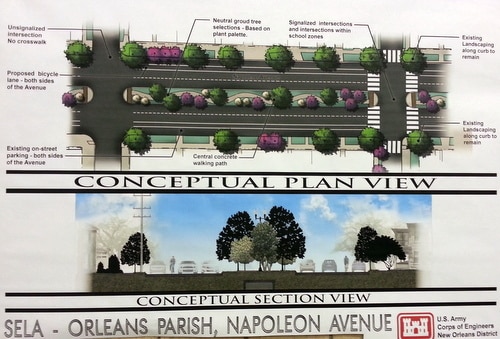 Conceptual designs for the Napoleon Avenue after construction is finished. (image by U.S. Army Corps of Engineers)

When construction is finished on the major section of Napoleon Avenue from South Claiborne to near St. Charles Avenue — expected by the end of the year — the U.S. Army Corps of Engineers plans to build a walking path down the center of the neutral ground similar to that in Broadmoor, but to narrow the neutral ground by nine feet to make room for new bike lanes in the street in each direction.

Those plans, as well as designs for post-construction Louisiana, Jefferson and South Claiborne avenues, were presented by the U.S. Army Corps of Engineers at an open house on Thursday evening. Among the details attendees learned:

While the walking path on Napoleon Avenue is something residents have long sought, the narrowing of it for the creation of bike lanes proved controversial among attendees. Faye Lieder said the last meeting on the landscaping ideas in October gave residents no idea that narrowing the neutral ground was under consideration, leaving them “blindsided” and “stunned” when the plans were revealed Thursday.

“Bike lanes may prevent some rear end collisions but create problems at intersections,” Lieder wrote in an email to Uptown Messenger after the meeting. “Aside from the questionable wisdom of bike lanes, why would the City ( just who made this decision anyway?) want to shrink green space on this beautiful oak lined avenue, already two lanes each way, where families gather on the median to watch Mardi Gras parades?”

Resident Richard Dimitry said at the meeting that the placement of the bike lanes next to the parking lanes is troubling, putting especially younger riders in danger of being hit by motorists opening their doors to get out of their vehicles.

“I can’t see that for the kids,” Dimitry said. “It’s not necessary to put them in danger.”

Jim Schnieders, who lives on Jefferson Avenue but enjoys bicycling all around Uptown, said he worries that a narrower neutral ground on Napoleon Avenue will make crossing the broad, busy road on cross streets more dangerous for drivers. Cars will have less room in the neutral ground to wait for an opening, Schnieders said.

“I’m like to ride my bicycle, but I don’t think we should create a potential safety hazard,” Schnieders said. “It would be safer for bikers if the bike lane was on the neutral ground also.”

“It’s much safer to put them in the side of the road, where the cars are,” Wingate said. 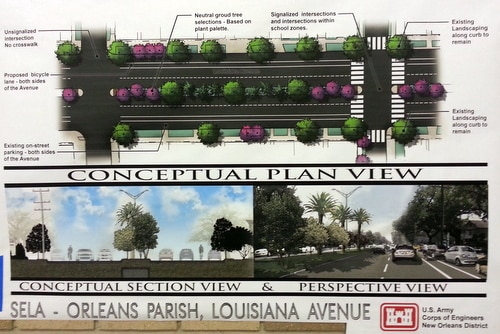 The plan for Louisiana Avenue.

While Napoleon Avenue dominated much of the conversation at Thursday’s meeting, residents of other corridors also had concerns.

Larry Hameen, who lives between Liberty and Loyola near Louisiana Avenue, said he wondered why Louisiana couldn’t receive a similar walking path instead of the shrubbery. Second-line groups and others would appreciate the walking path, he said, and he worried that a heavily planted neutral ground could quickly become overgrown.

“They say they’re going to maintain it, but I tend not to believe that,” Hameen said.

Construction on Louisiana Avenue won’t be finished until much later than Napoleon, like 2018, so Wingate said there is more time to continue discussions on its design. Planners are still looking at the possibility of a walking path on some sections of Louisiana, particularly nearer the river where it is wider — though the neutral ground is already too narrow for a walking path in some areas.

The plan for South Claiborne Avenue.

Carrollton neighborhood activists said they were concerned about the treatment of South Claiborne Avenue. Neighborhood leader H.V. Nagendra said he appreciated the addition of some water management features, but felt more could be done.

“It is still not sufficient, but at least it is a gesture toward what we asked for,” Nagendra said. “But it is a slight improvement from what they showed us before.”

Jenel Hazlett said the construction there would have been an “opportunity to do something interesting” with a major entry point to the city, but instead it seemed to get the least attention. The plans show no bike path, and few trees — essentially the same as what’s there now.

“I think Claiborne is getting short shrift,” Hazlett said. “Every time you ignore what it could be, you make it less good.”

Wingate said that ways to enhance South Claiborne are still being discussed, particularly where it meets the Carrollton corridor. Nagendra said that special attention should be given to the configuration of the bus and public-transportation facilities there.

“There’s certainly something we can do to make the area more pronounced,” Wingate said.

The plan for Jefferson Avenue.