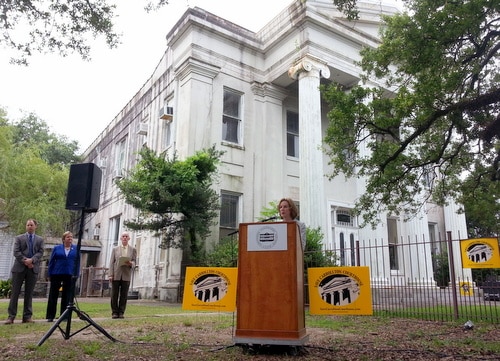 Sandra Stokes of the Louisiana Landmarks Society speaks in front of the Carrollton Courthouse on Wednesday, June 24. (Robert Morris, UptownMessenger.com)

A day after the former Carrollton Courthouse was named to a prominent list of endangered national landmarks, New Orleans city and school officials gathered on its lawn pledging to seek a public use for the shuttered building that properly honors its history.

The courthouse building — built in 1855 by noted architect Henry Howard at a site where Andrew Jackson had commemorated the 25th anniversary of the Battle of New Orleans — actually spent the majority of its life as a public school. Starting in 1889 as McDonogh No. 23, it became Benjamin Franklin High School in 1957, then Lusher’s middle school in 1990, and Audubon Charter from 2006 to 2013, when the deteriorating conditions exacerbated by roof damage during Hurricane Isaac forced the school board to close it.

On Tuesday, the National Trust for Historic Preservation announced that the courthouse was on its 2015 list of “America’s 11 Most Endangered Historic Places,” alongside other sites such as a Birmingham motel that was a central to the civil rights movement, the old U.S. Mint building in San Francisco and Little Havana in Miami.

“We now have the support of a national preservation organization behind us in our efforts here locally to do the right thing by this wonderful building,” said Walter Gallas, executive director of the Louisiana Landmarks Society.

Following its century of use as a school, the courthouse remains owned by the Orleans Parish School Board, which is governed by state law in what it can do with property it no longer uses. If no charter schools want a surplus school-owned property, the usual next step is to take it to public auction.

The School Board was preparing to take that step this spring, but then agreed to postpone the auction so that Carrollton residents and preservationists could try to find a better future for the building. The School Board also has the power to sell the building to another public entity, instead of taking it to auction.

While designation by the National Trust for Historic Preservation conveys no official protection for the site, it may draw new interest in the building from an organization or entity looking for a new home, officials said.

The property where the building sits (on Carrollton Avenue between Hampson and Maple) carries residential zoning, so anything other than a single or two-family home, a church or a nursing home would likely require City Council approval. Councilwoman Susan Guidry said she, too, will work to ensure a fitting future for the building.

“I recognize the incredible significance and importance of this property,” Guidry said. “I will do everything that I can to make certain that its use in the future will be a use that is appropriate to the historical significance of the building, and that we will find a steward for it who will appreciate that and carry forward so that 160 years from now, we will again be able to celebrate this building.”

“That’s not going to happen,” Guidry said. “I can’t imagine any council that would allow that building to be demolished, so I think there’s a level of safety right there.”

In the meantime, Guidry said she will join in the effort to seek a governmental agency or organization that is interested in the building.

“Is there a public use that we can find government funding to afford?” Guidry said. The building is not currently in any capital projects plans for the city of New Orleans, Guidry said, but added, “we’re going to be shaking the trees here to see what we can find.”

No auction date has been set, but the longer the building sits vacant, the more it costs taxpayers. The building’s insurance, grass cutting, and security (largely to keep people from breaking into the building) costs about $100,000 per year, not an insignificant drain on the budget for city schools, said School Board member Woody Koppel. Meanwhile, the building’s $3 million appraisal from April is considered valid until October, at which point the OPSB would have to pay for a new appraisal.

“We’ve got about a six-month window to get something done,” said OPSB Chief Financial Officer Stan Smith.

The next step for determining the future of the courthouse could become clearer next month, when the Louisiana Landmarks Society hosts a public forum seeking ideas to present to the School Board. That forum will be at 6 p.m. Wednesday, July 29, at First Unitarian Universalist Church, 5212 South Claiborne Avenue.

7 thoughts on “School, city officials pledge to seek public use for Carrollton Courthouse”