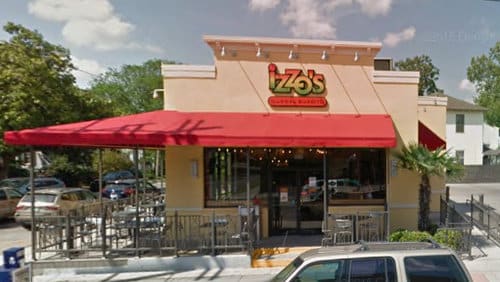 Izzo’s Illegal Burrito — the Baton Route-based franchise that moved into the former Popeye’s building on Magazine Street — now wants to sell beer and margaritas as it does elsewhere in the state, and the City Planning Commission will have to decide between a favorable recommendation from its staff against the wishes of a number of nearby neighbors.

Izzo’s (which was founded in 2001 in Baton Route, just outside the LSU campus) is at 4041 Magazine Street, and is seeking a conditional use to serve alcohol for on-premises consumption with meals, according to the City Planning Commission report. The chain has 15 other locations in the state, and 13 of them have alcohol licenses that are only used for selling beer and margaritas — and three of those locations are already in the New Orleans area, the report states.

No bar areas is planned, and alcohol sales only comprise about 5 percent of sales at Izzo’s locations, the report states. The change is not expected to increase the number of customers, nor the parking or traffic impact of the restaurant, so the staff recommends that the change be approved.

“From a design perspective, the service of alcohol will not make any changes and would not be inappropriate for the area or offensive to surrounding properties,” the report state, noting a number of other recent approvals to serve alcohol along Magazine in the surrounding blocks. “…Given that the sale of alcohol beverages is customary with food service and typical of a restaurant, the approval of the requested conditional use would not change the nature of the operation.”

The CPC report does not distinguish fast food from other restaurants with respect to alcohol sales, and even notes that the Master Plan “does not address the issue of alcoholic beverage service for a fast-food restaurant.” The restaurant currently closes no later than 10 p.m. each night, and to prevent the location from becoming more like a bar, the City Planning staff recommends prohibiting it from staying open past midnight.

When Izzo’s founder Ozzie Fernandez held public meetings in March and April about its plans, he noted that residents were concerned about rowdy crowds, the proliferation of alcohol-serving establishments around the neighborhood, and what could potentially move into the location if Izzo’s left. Subsequent to those meetings, the Touro Bouligny Association and nine other neighbors individually wrote letters of opposition to the alcohol sales at Izzo’s, according to the City Planning Commission report.

“If this permit is allowed, there will be no control over what goes into this location after Izzo’s closes,” wrote residents Robert and Ann Eisen. “If another fast food goes into this space, they could then serve liquor, or it could turn out to be another bar. This is a quiet residential neighborhood and we do not want Izzo’s to become another bar.”

Marengo Street resident Tim Lyman argued that local, standard residents often have a difficult time obtaining alcohol licenses, and that Izzo’s already appears to be becoming more like a bar.

“You allowed them to construct a nice covered outdoor dining area on the Marengo Street side of the building,” Lyman wrote. “Of course they want to sell drinks to the people there. But it is a slippery slope, and allowing liquor there will surely be popular enough to demand expansion of the space, the hours, and to others who want to imitate success.”

At least three households, however, wrote in support of the alcohol sales. Chestnut Street residents Vincent and Erica Avila wrote that they enjoy the Izzo’s franchise, but drive to Metairie instead of the location on Magazine Street so that they can have a drink with their meal.