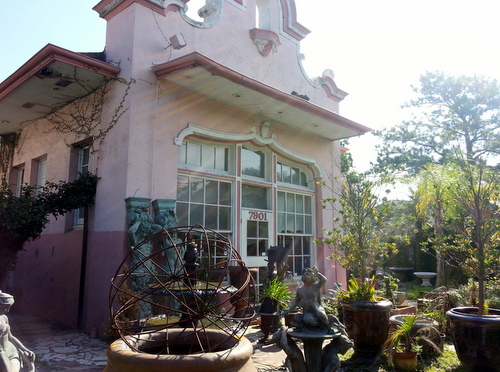 A nearly 80-year-old building on St. Charles Avenue that was once a gas station, bagel shop and more recently a fountain store is slated to be torn down and replaced with a new house, less than a year after neighbors successfully protested plans for a condo development there. 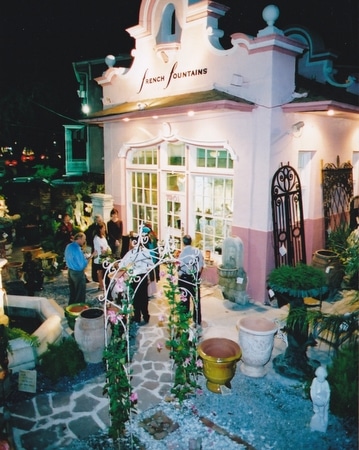 The opening party for French Fountains in 2003. (photo courtesy of Michelle LeBlanc Fine)

The pink building at 7901 St. Charles Avenue — just across Fern Street from Vincent’s Italian restaurant — dates its use as a gas station back to the 1930s, according to city documents. Prior to Katrina, the building was a garden shop in the 1970s and subsequently became The Bagel Factory, and Michelle LeBlanc Fine leased it to open her business, French Fountains, there in 2003, she said. In 2011, LeBlanc Fine closed her retail business to focus on manufacturing and design consultation and moved into an office a block down St. Charles, and the old shop at 7901 was subsequently used for another proprietor’s consignment business, LeBlanc Fine said.

The building is an example of Spanish Revival architecture that was popular in the early 1900s, “one of the most diverse and colorful periods for architecture and urban design in American history,” LeBlanc Fine said in an email. She said she has been told that the building formerly had a low-pitched red-tile roof to accompany its characteristic stucco walls and the rounded arch over the door.

“The building tends to elicit romantic inspiration from those who come to admire it,” LeBlanc Fine wrote in an email. “During the 10 years that I operated my garden of fountains there, visitors from all over the country would come to linger in my gardens. Over the years, there were so many people who came by to say that they had always wanted to own this building and many who wanted to turn it into a coffee shop or community space for activities.”

Last year, however, a Metairie-based developer sought rezoning to build a six-unit condo building on the property. That plan split neighbors, technical problems with the zoning ultimately scuttled the project, and Terry Tedesco Homebuilders bought the property in March, according to city documents.

On Monday, Todd Tedesco appeared before the Neighborhood Conservation District Advisory Committee asking to tear the building down and replace it with a two-story, single-family home. When asked about the previous controversy over the site, Tedesco attributed the neighborhood’s former complaints to the density of the condo proposal. A single-family home with double-gallery porches, by contrast, will simply fit into the neighborhood, he said.

The project has its own complication, however, Tedesco said. While some remediation of the site was attempted in the 1990s, not all the gas tanks were removed, and the standards for such cleanup projects have since been dramatically raised, he said. Part of the reason the building needs to be torn down, he said, is that some of the eight remaining gas tanks are partially under the building.

“It’s very difficult to deal with, especially with the tanks,” Tedesco said. “We want to clean the site up, and get everything ready to go.”

The company is currently conducting inspections of the site in preparation for the cleanup, which will be overseen by the Environmental Protection Agency, Tedesco said.

“This is a binder of what they found,” Tedesco said. “It’s pretty intense.” 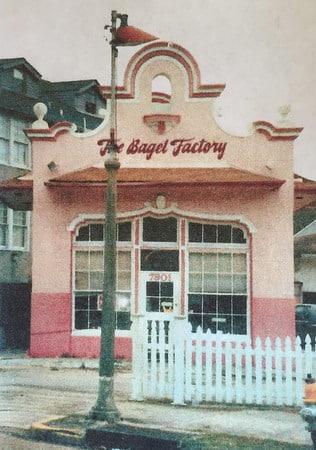 Three members of the NCDAC voted against the demolition — the staff representatives from the City Planning Commission and Historic District Landmarks Commmission, as well as appointee Lee Bressler — but it passed with seven votes. The request now heads to City Council for a final decision.

LeBlanc Fine said the building would have been ideal for a small community center, coffee shop, yoga studio or store for art or plant sales. The complications posed by the buried gas tanks and the building’s zoning are significant, she acknowledged, but also lamented the likely departure of the picturesque little building.

“To lose this famous icon on our avenue will be a sad occurrence for many who see it as a landmark designating the beginning of Riverbend, where St. Charles meets Carrollton at the bend of the Mississippi River,” LeBlanc Fine said.

[Note: This article was originally published at 5:55 p.m. Monday, June 1, but it was updated June 7 with the comments and photos from LeBlanc.]