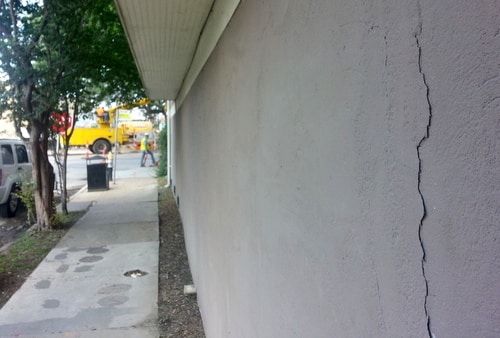 A crack is visible in a foundation that attorney Michael Whitaker says is only 9 years old in the 2500 block of Napoleon Avenue. (Robert Morris, UptownMessenger.com) 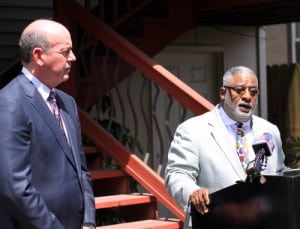 A total of 74 plaintiffs have now joined the lawsuit alleging that their homes have been damaged by construction of new drainage canals under major thoroughfares through Uptown New Orleans, but their attorney says the costs of repairing these houses is already built into the project and won’t increase the costs for the Sewerage & Water Board.

The lawsuit filed May 11 alleges that the construction on Napoleon, Jefferson, Louisiana avenues and along Prytania Street has damaged the buildings along it, and that the Sewerage and Water Board of New Orleans is obligated to pay the property owners the cost of repairs. Based on a legal theory of “inverse condemnation” established in the previous lawsuit by Broadmoor homeowners during their phase of the project, the residents don’t have to prove any negligence by the U.S. Army Corps of Engineers or their contractors — who aren’t even named as defendants in the suit — but simply that the damage was caused by the project, said their attorney, Michael T. Whitaker.

The design of the project actually anticipates the costs of those repairs to private property, Whitaker explained in news conference on Napoleon Avenue on Wednesday morning. The federal government is paying the entire cost of the project up front — $300 million on those four roads in Uptown alone — and the Sewerage and Water Board will pay 35 percent of that back over time. Whitaker said he has discovered that the Sewerage and Water Board’s cost of settling claims arising from the project can be deducted from the repayments, however, so the lawsuit will not increase the cost of the project to the agency.

“We know that they’ve got millions of dollars — in their own words — set aside for this, and we know they are the claims adjusting entity for these claims, so I believe they are expecting and anticipating these kinds of claims,” Whitaker said.

The SELA project actually has its own process to address damage claims from residents, which can be reached at (504) 585-2450 or www.swbnoselaclaims.com.

“Our goal is to resolve damage claims quickly, fairly and in a cost-effective manner so that property owners may repair any SELA-related damages in a timely fashion and avoid prolonged litigation that could take years and be very costly,” said Cedric Grant, executive director of the Sewerage and Water Board of New Orleans, in a statement Wednesday afternoon. “This claims process has worked well with other recent SELA projects where claims were resolved without the need for litigation.”

Whitaker, however, said he doesn’t trust the agency to make a fair assessment of the problems its project has caused.

“The Sewerage and Water Board administration procedure seems to be a black hole,” Whitaker said. “They have been unable or unwilling to describe to us what exactly the procedure is. Frankly, since they control the game, it is not something I would be willing to engage in at this time.”

Whitaker says he doesn’t yet have an estimate for the total damage to the 74 plaintiffs, though he noted that structural problems can cost “six figures” to repair. He also expects the number of plaintiffs to continue to grow, as there is no procedural barrier to adding more people to the lawsuit yet. 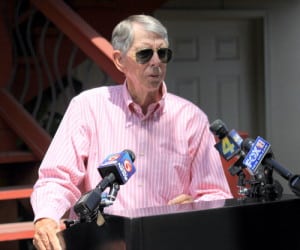 Bill Sewell, one of the lead plaintiffs in the lawsuit, speaks during Wednesday’s news conference. (Robert Morris, UptownMessenger.com)

Watson Memorial Teaching Ministries is preparing to celebrate the 100th anniversary of their buildings at St. Charles and Napoleon, which they moved into 19 years ago, said the Rev. Tom Watson. They made extensive structural repairs to the building after Hurricane Katrina, but have suddenly seen leaks in the roof and water in the basement — problems that their engineers attribute to the construction right outside, Watson said.

“We hope that justice is done, and that’s why we’re part of the lawsuit,” Watson said. “I personally see this as a justice issue, along with the other residents who have to live through this every day.”

One of the original three plaintiffs in the case, Jefferson Avenue resident Bill Sewell, is an engineer and former director of the city’s Department of Public Works who retired in 2006. Sewell said he hates to be in a position of suing a city agency over the work, but he feels his suggestions for mitigating the damage to his home have fallen on deaf ears.

The lawsuit, Sewell said, is the only avenue to bring these issues before a neutral judge to determine a fair resolution.

“When you offer solutions and they won’t speak with you or talk to you, and they just ignore it, I decided the only thing to do was to try to find an independent, intelligent, neutral third party to listen to both sides,” Sewell said.