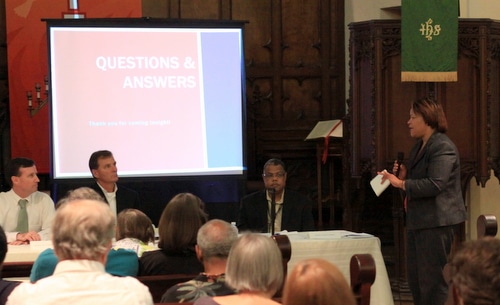 City Councilwoman LaToya Cantrell raises a question with officials from the Sewerage and Water Board of New Orleans, the U.S. Army Corps of Engineers, and the Regional Transit Authority on Tuesday evening at First Presbyterian Church. (Robert Morris, UptownMessenger.com)

The road gets repaved, and then it’s dug up again to fix a broken pipe underneath. The streetcar tracks get replaced, then torn out again for a new drainage canal. Power lines are being replaced over a road about to be repaved, instead of buried underneath it.

Is he right? Will the roads in New Orleans ever work?

At the present, the answer may be “no,” or at least, “not yet,” Cantrell told the audience.

“Right now there is no overall strategy that I can even tell you about,” Cantrell said of repairs to the broken roads. “Every time I think I see the worst, I see another.”

Without that overall plan, the best that officials can offer seems to be an increased emphasis on coordination. Although both entities dig up and replace city streets for their own reasons, the Sewerage and Water Board is actually a separate agency from the city’s Department of Public Works, officials explained. But in an effort to communicate better, they have started housing engineers in one another’s offices.

“There is a lot of effort going into coordinating these projects,” said Joe Becker of the Sewerage and Water Board.

“We do not want the S&WB to come along after we repave a road and fix a pipe,” said Cheryn Robles of the city’s Department of Public Works.

Communication about the rate of progress will also be improved, Robles said. When the pothole killers return to city streets this summer, the city is also planning to launch a tracking app that will let residents see in real-time where they and the vacuum truck are working, and where they have been, Robles said.

Sometimes, the coordination is more effective than the average resident can actually see. For example, even though the RTA replaced the streetcar crossties several years ago, they specifically halted just before and after the intersections of Jefferson, Napoleon and Louisiana avenues, where the SELA drainage-canal project is now crossing this summer — so that work was not actually duplicated, despite appearances otherwise, said John Fogarty, an engineer with the U.S. Army Corps of Engineers.

In other cases, what might seem like a logical plan is simply unrealistic. Burying the electrical lines is several orders of magnitude more expensive than hanging them overhead, Becker noted, and the cost of doing so would likely result in dramatically increased rates for the consumer.

In the long term, however, the Landrieu administration is using a truck called the Road Tester 3000 that uses lasers, GPS and digital imaging to “collect the pavement profile, rutting and roadway geometrics” of all the public streets in the city, officials said. Those results will be compiled into a “Pavement Condition Index” score that will then prioritize where future roadwork should take place.

The testing phase project began in December 2014 and Robles said the city expects to have results this fall, to begin formulating the roadwork plan that Cantrell and Uptown residents so acutely feel the lack of.

In the meantime, Mayor Mitch Landrieu’s office reminded residents that the work already underway will eventually pay off.

“Improving New Orleans’ aging infrastructure is a major priority, and we have an once-in-a-lifetime opportunity to better position New Orleans for the future,” Landrieu’s office said in a statement. “These projects are the result of years of hard work with our federal, state, and local partners, and we are fully coordinating all this work to ensure it’s done right the first time.”

For more details on the individual projects, see below for live coverage.

5 thoughts on “Is there a plan to fix the roads in New Orleans?”