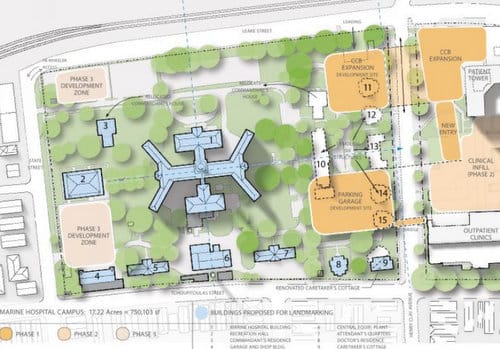 The Children’s Hospital master plan, with buildings to be saved marked in blue, and new buildings in orange. (via City of New Orleans)

The collection of nine former New Orleans Adolescent Hospital buildings acquired by Children’s Hospital will receive landmark protection, but the rest of the 17-acre site will not, a city panel ruled Thursday — effectively allowing the demolition of six dilapidated NOAH buildings in the near future and defining the path ahead for the expansion of Children’s Hospital.

Thursday’s ruling followed a sometimes-contentious discussion between Children’s Hospital officials and members of the Louisiana Landmarks Society. Although the sides had previously compromised on the demolition of only the six former residential buildings along Henry Clay Avenue, the Landmarks Society wanted to see the entire rest of the site protected by the Historic District Landmarks Commission — not just the remaining buildings.

“We don’t want to stop Children’s Hospital from expanding any more than you do or than anyone else does,” said Stephen Chauvin of the Louisiana Landmarks Society. “All we want is for the site to be designated so that in the future, it will have your review, your oversight. It’s just a layer of protection and we should be afforded it.”

The residential structures and wall must be removed so that the entire campus can be unified on both sides of Henry Clay Avenue, hospital officials have explained. In their place, Children’s Hospital will build a new parking garage and clinic building, connected to the current hospital buildings over Henry Clay Avenue. The remainder of the former NOAH buildings are not designed to meet modern medical standards, so they will be used for administrative offices and short-term housing for patients’ families.

But in the negotiations over this plan, Children’s Hospital officials said that the Louisiana Landmarks Society have continually changed their goals. If they really supported the development plan that Children’s Hospital has proposed, why create so many new regulatory hurdles for its creation? asked Dr. Stephen Hales, a pediatrician and long-time member of the hospital board.

“They have shown in the past week they will resort to almost any tactic to have their way,” Hales said. “Why would we object to the designation of the site itself? The answer has been made abundantly clear in the last week, through the implacable opposition of those who have the most extreme opinions.”

The city’s historic planning staff acknowledged the rich legacy of the property. Originally the U.S. Marine Hospital, it was part of the federal Public Health Service Hospital system intended to care for returning seamen and protect the country from epidemics they may have brought from abroad. The buildings were designed in Colonial Revival Style by Percy I. Balch and the grounds by landscape architect A.D. Taylor — all of which contributes to the property’s significance and need for protection.

Tearing down the residential buildings and the wall, however — the compromise already agreed upon by preservationists and the hospital — “will fundamentally undermine” the campus-like nature of the property, said Eleanor Burke, deputy director of the Historic District Landmarks Commission. What is significant about the entire property, Burke said, is the way that it is visually cohesive and set apart from its surroundings.

“It is a site unto itself which is separate from the rest of the city,” Burke said. “The removal of the six structures and the wall at Henry Clay Avenue will compromise the significance of the site in such a way that it no longer retains that character-defining feature of the campus.”

With that element lost, Burke said, it makes more sense simply to apply the landmark designation to the remaining buildings.

The Historic District Landmarks Commission largely agreed with Burke’s report, and said that the proposal by Children’s Hospital is likely the best outcome for the property.

“Just seeing any of these buildings saved is an incredibly wonderful thing,” said Commissioner Greg Hackenburg. “I’ve been watching this site decay over the years and watching the holes in the buildings get bigger and bigger. I don’t think any sort of organization could take over the site as-is, without doing significant alterations to it. We just don’t build hospitals over this any more.”

The staff report to landmark the buildings but exempt the site passed the HDLC by a wide margin, with Commissioner Ed de Montluzin the sole vote against it.

The vote does not, however, give Children’s Hospital a blank check for development, officials said — but it does establish the path that lies ahead for the expansion project.

Children’s Hospital does have permission to tear down the six residential buildings and portion of the wall along Henry Clay Avenue, granted by the City Council last week. Because approval from the U.S. Army Corps of Engineers is needed for work so close to the river levees, however, the hospital would at some point be required to conduct a federal process (known as a Section 106 review) for discussing the impact of the work from a historical standpoint.

The Section 106 review primarily constitutes a public discussion on ways to mitigate the losses associated with the project — such as how to memorialize the buildings that will be torn down — and is unlikely to prevent the demolition process from moving forward.

Children’s Hospital does not have permission to begin building the new parking garage or clinic space on the site, however. Under the new Comprehensive Zoning Ordinance, all major institutions — including hospitals and universities — must create an official Institutional Master Plan that must be approved by the City Planning Commission.

“If approved, the plan becomes effectively the zoning for the site. From that day forward, anything the hospital wants to do, so long as it’s compliant with the publicly vetted master plan, it can be built by right,” said Robert Rivers, director of the City Planning Commission. “But any time hospital chooses to do something different, if they want to do something that is not in the master plan, they have to go through a public process … that requires public hearings before City Planning as well as the City Council.”

The entire $250 million project is expected to take up to five years to complete — 18 months for architecture and site planning, and three years for actual construction, hospital officials have said.