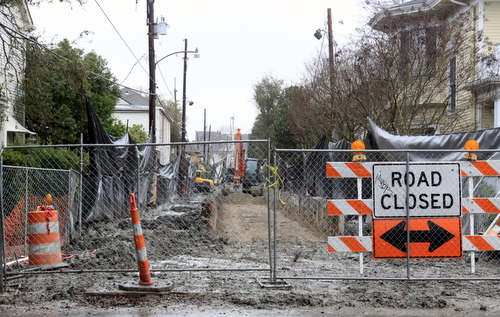 A group of Uptown property owners — three families to start, but expected to number in the hundreds as the case grows — filed suit this week against the Sewerage & Water Board of New Orleans, seeking compensation for damage to their homes from proximity to the installation of major new drainage canals along some of Uptown’s largest thoroughfares, their attorney said.

The lawsuit does not allege any negligence by the government and does not even name the U.S. Army Corps of Engineers or its contractors as defendants, said Michael T. Whitaker, the California-based attorney representing the families. Instead, Whitaker said, it simply claims that the broken foundations, cracked walls, business losses, blocked driveways and even reduction in property values all represent a form of eminent domain contrary to the Fifth Amendment of the U.S. Constitution, which prohibits private property from being taken for public use, without just compensation.”

The case covers damages to homes along each of the corridors that are part of the ongoing Southeast Louisiana Urban Flood Control Program — Jefferson (which includes a four-block stretch on Prytania Street), Napoleon and Louisiana avenues. Whitaker said his lawsuit is heavily modeled on a similar case from a decade ago (known as the “Holzenthal” case for one of the families involved) after an early SELA project drainage canal was installed in Broadmoor.

“Property shall not be taken or damaged by the state or its political subdivisions except for public purposes and with just compensation paid to the owner or into court for his benefit,” wrote former 4th Circuit Court of Appeals Chief Judge Joan Bernard Armstrong in her 2007 ruling on that case. “In every expropriation, a party has the right to trial by jury to determine compensation, and the owner shall be compensated to the full extent of his loss․”

That concept, Whitaker said, is known as “inverse condemnation” and applies to damages from the current SELA projects exactly the same as it did for the Broadmoor families.

“We regard the Holzenthal case as precedent for your claims,” Whitaker said in a presentation to property owners. “It’s actually a roadmap we’re going to use in our case against the Sewerage & Water Board.”

The Sewerage & Water Board did not respond to an emailed request Thursday morning to discuss the case.

Speaking at the Columns Hotel on Wednesday night, Whitaker said his practice is in Carmel-by-the-Sea, Calif., where he was involved in a major lawsuit against the Los Angeles Metro Rail system over losses to businesses. He has close friends he visits on holidays who live on Jefferson Avenue in New Orleans and as the SELA project progressed, Whitaker decided to become involved on their behalf and for others. Bruno & Bruno Law Firm of New Orleans has agreed to be the local co-counsel on the case, Whitaker said.

“They’ve been telling me for the last couple of years about the misery they kept experiencing,” Whitaker said.

Whitaker said that the three families named in the petition for damages — the Sewells on Jefferson Avenue, the Fenners of Arabella Street and the Deussings on Prytania — represent the lead plaintiffs in the case, but he will be joining others to it. He has held four town hall-style meetings since March with between 200 and 300 people attending in Uptown locations such as the Jewish Community Center and the Columns Hotel, and estimated that about 100 have signed up to join the lawsuit already.

Charles Napoli was among the attendees Wednesday night, and said his father, an 84-year-old resident of Jefferson Avenue since the 1970s, had to move out of his house because, with the driveway blocked for more than two years, he couldn’t manage the several-blocks walk. Now, Napoli, said his own Jefferson Avenue home has suffered catastrophic damage that an engineer has attributed to the vibrations from the project.

“We went away on vacation last week, and we came home to find out that part of our house had separated,” Napoli said. “An addition separated from the original house, and we had water inside.”

Although the families represented will all be making the same basic legal argument about the Sewerage and Water Board’s responsibility to compensate them, the case will not be a class-action lawsuit, Whitaker said, because of the “one size fits all” judgments rendered in those cases. Instead, each property owner will seek payment for their own individual cost of damages, he said. Meanwhile, Whitaker is paying the experts he is consulting up front, and his firm will be compensated on a contingency fee only if the case is successful, with costs factored into the individual judgments he seeks.

More than 30 people attended the Wednesday night meeting with Whitaker at the Columns, and many of their questions focused on the risks they may face by joining the lawsuit. One woman asked whether — since the Sewerage & Water Board is self-insured on this project — the city will subsequently raise rates to pay for the judgments.

The board already has money set aside to pay judgments, Whitaker responded. Further, any judgments paid to homeowners for damages will actually be credited as part of the payments that the Sewerage & Water Board owes to the U.S. Army Corps of Engineers for its share of the project’s overall cost. In that way, the U.S. Army Corps of Engineers is almost serving as an insurer for the Sewerage & Water Board, he said.

“It’s not like you’re suing yourself, because you’ve already paid for it,” Whitaker said.

As part of the SELA project’s own claims process, government officials sent inspectors to document the conditions at homes along the route. Whitaker said he will obtain those reports as part of the investigation into the case, but that he expects to challenge their validity.

One Jefferson Avenue resident said he was trying to refinance his house, and that the appraiser actually reduced the value of his house by “tens of thousands of dollars” — despite the rapid increase in property values elsewhere in Uptown New Orleans — specifically because of the conditions created by the construction. Whitaker said that the diminution of value will be included in the claims.

Another resident on Napoleon Avenue asked whether health hazards caused by poor air quality around the construction zones would be part of the lawsuit. Whitaker said he has not begun investigating those issues yet, but would look into them.

Whitaker and Bruno filed the initial petition for damages on Monday, and the Sewerage & Water Board has yet to respond, court documents show. At a minimum, Whitaker said he expects the case to take 18 months, likely concluding roughly around the same time as the SELA projects themselves.

“I just don’t think the nature of this beast is going to lend itself to an abbreviated resolution period,” Whitaker said, “because they’re out there still.”