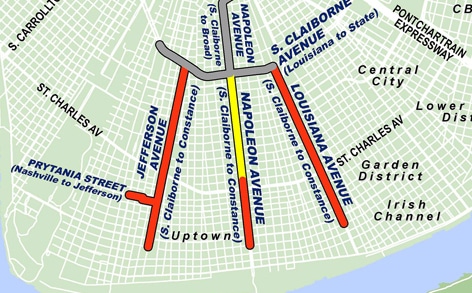 The section in yellow is scheduled to be complete by the end of the year. (map via U.S. Army Corps of Engineers)

Contractors with the U.S. Army Corps of Engineers are scheduled to finish the first major leg of the massive ongoing series Uptown drainage projects — the section of Napoleon Avenue between South Claiborne and Carondelet — by the end of the year, officials said, providing some measure of relief and hope to drivers weary of years of avoiding so many major thoroughfares.

When the contract for the phase of Napoleon Avenue between South Claiborne and Carondelet was awarded back in fall 2011, the initial expectation was for it to be finished by late 2014. The project was beset by complications — including a utility crossing near the Ochsner Baptist campus that proved more difficult than expected — and more recent estimates had placed the completion of the project in the summer of 2015.

With heavy machinery still lining deep trenches along the project site, several more months will be needed before that phase project is complete, said Lori Wingate, a project manager for the Corps, after last week’s meeting with the Bouligny Improvement Association. Now, the best estimate for completion is before the end of the calendar year, Wingate said.

In the meantime, however, the Freret Street crossing at Napoleon is scheduled to reopen to traffic in mid June.

“We know everybody’s impacted, trying to get around town,” Wingate said. “We understand it seems a little bit longer than temporary inconveniences.”

The streetlights taken down during the project will all be replaced, Wingate said. City officials want to install more period lighting along the stretch, she said, but that idea remains under discussion.

The remainder of Napoleon Avenue, as well as South Claiborne, Jefferson and Louisiana avenues, will all remain under construction into next year, with various legs finishing incrementally until the entire project wraps up in 2018. The next major disruption for Uptown residents will be the simultaneous crossing of the St. Charles Avenue neutral grounds at Napoleon, Louisiana and Jefferson, which will interrupt streetcar service for three months this summer.

The U.S. Army Corps of Engineers is holding an an informational meeting to discuss about the projects and the streetcar disruptions at 6 p.m. tonight (Tuesday, May 26) at the Lyons Recreation Center gym, 624 Louisiana Avenue.