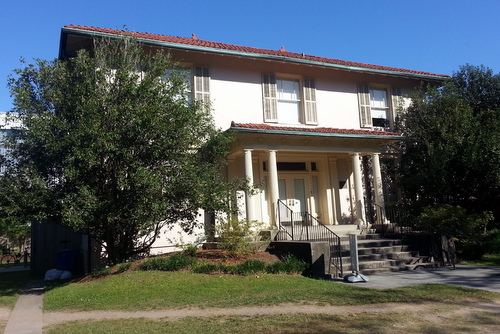 The building that formerly housed the Newcomb College Institute at Tulane University is slated to be replaced with a new building, but its demolition will require City Council approval. (UptownMessenger.com file photo from May 2014)

Almost exactly a year after it was first made public, Tulane University’s plan to tear down the former home of Newcomb College Institute for an expansion of its dining hall received initial approval from New Orleans city officials on Monday, after a prominent local architect told them that the design of the century-old building was less important than its central location on campus.

Tulane first asked the city for permission to tear down the building in May 2014, and got a split vote from the committee overseeing demolition, which would have sent the request to the City Council for a final decision. Newcomb alumnae sent more than 150 letters to City Councilwoman Susan Guidry, and Tulane withdrew its request in early July.

Since then, the university has been working with the councilwoman’s office to address any concerns about the project, said Paul Harang, Tulane’s director of community and neighborhood relations.

The building was built in 1908 and sold to Tulane a year later for use by the music department, then subsequently became the home of the dean of Newcomb College and then the Newcomb College Institute, architect David Waggoner told the committee. The university plans to use the space for a $50 million expansion of the dining facilities that will also have classroom, study and administrative space, he said.

The new building will also house the Newcomb College Institute, which the university website currently locates in three different buildings.

“The space will be larger than NCI’s current space, unified, and designed specifically for the institute’s needs,” Harang wrote in a followup email to Uptown Messenger on Tuesday. “As noted in yesterday’s presentation, The Commons will also house the university’s new dining hall, meeting space, and classrooms. This project will draw students back to the center of campus in a way that will enhance the undergraduate experience.”

Ultimately, Waggoner said, the crucial space next door to the busy Lavin-Bernick Center is more important than the old building itself.

“It’s a wood-frame stucco building that has no unique architectural or historic characteristics,” Waggoner said. “Today it’s empty. It’s not to scale; nor does it contribute to the Tuscan-inspired classical architecture of the James Gamble Rogers master plan for Newcomb campus.”

Unlike last year’s meeting, the project drew little scrutiny from the panel of city officials — one noted briefly that the building is at the campus interior, and not facing the public, and then they voted 7-2 in favor of it.

Jenel Hazlett, one of the “no votes,” said after the meeting that she opposed the project because she didn’t see much difference in it from last year.

The demolition request will next be sent to the full City Council for final approval.

[Note: This article was first posted Monday afternoon, and updated Tuesday, May 5, with the information from Harang’s followup email.]

(In a separate action, the same panel approved the demolition of six buildings on the former New Orleans Adolescent Hospital site — click to read more.)