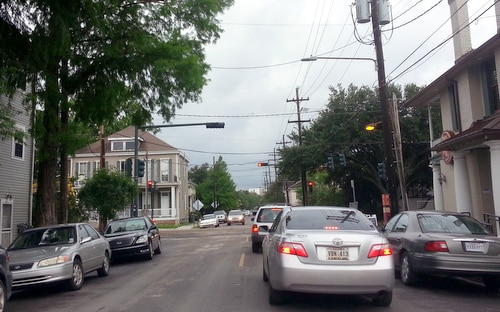 Cars wait to pass through the newly-reopened intersection of Freret and Jefferson on Friday afternoon, shortly after barriers were removed. (Robert Morris, UptownMessenger.com)

Ending the apparent blockade of the Freret commercial corridor, contractors for the U.S. Army Corps of Engineers removed the barricades from the Jefferson Avenue intersection with Freret on Friday and reopened the street to two-way traffic.

The Corps had originally hoped to reopen Freret at Jefferson by the end of April, but that goal was thwarted by the weather, a spokeswoman said earlier in May. The reopening was rescheduled to today — Friday, May 15 — and although the barriers remained up in the morning and a heavy downpour struck at noon, the road was clear for drivers by mid-afternoon, as promised.

The Napoleon Avenue end is scheduled to reopen June 15, the Corps has said.