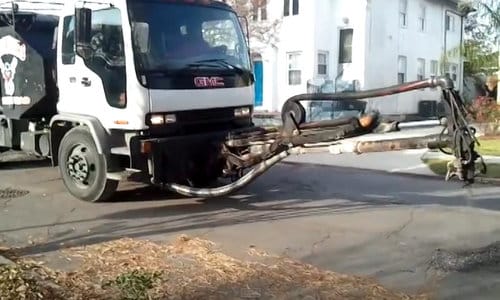 In a city where potholes are less a problem with streets and more a permanent fact of life along them, New Orleans residents all cope in their own ways — dodging them, reporting them, do-it-yourself fixing them or decorating them with adornments from the ironic to the obscene.

Many New Orleanians have also heard of the city’s “pothole killer,” a truck that fills potholes by spraying materials into them, though fewer have seen it in action.

On Wednesday night, however, Uptown residents and City Councilwoman LaToya Cantrell discussed a new concept that might give them hope that the pothole killer will one day visit their streets — real-time online tracking that could at least show where the pothole killer is or has been.

Cantrell was taking questions during the annual meeting of the Bouligny Improvement Association, when a recent transplant to the city spoke up hesitantly. “I’ve only been here about a year,” he said, “but the potholes…?”

After the wry laughter in the room quieted down, Cantrell described the condition of the streets as a massive, citywide problem. The city’s pothole killer has recently been out of service, she said, but it is scheduled to return to the streets in June.

“Let’s be honest,” Cantrell said. “Some of these potholes, the pothole killer would probably fall in.”

The condition of many neighborhood streets around Uptown has been aggravated by the increased traffic and heavy vehicles related to the detours around the SELA drainage-canal projects, said Bouligny Improvement Association president Hope Meyer. Because of that, the U.S. Army Corps of Engineers participate in restoring the neighborhoods once the SELA project on the main roads is complete, Meyer said.

“We were bad before, but we were not this bad,” Meyer says.

Cantrell agreed that the construction has likely hastened the deterioration, but said the city needs to come up with a solution that doesn’t depend on the generosity of the federal government. New Orleans simply doesn’t have the money to keep the streets in proper condition, and needs to create a comprehensive plan to maintain them into the future.

“We need a solution, and I don’t have that solution. It’s going to have to be collective thinking,” Cantrell said.

In the meantime, asked Ann Meese, another attendee at the meeting, is there any way for residents to see where that pothole killer will be, once it returns to service?

Residents can call the City Council office to find out what the schedule for the pothole killer is, but there’s no way for them to track it in real time, Cantrell replied.

After the meeting, Cantrell called the suggestion for an online pothole-killer tracker a “great idea,” and possibly easy to accomplish. Independent groups have already created their own apps using city data related to bus service, crime in the French Quarter, and even the location of toilets during Mardi Gras, so placing some sort of GPS device in the pothole killer and making the data public would not likely be too difficult, Cantrell said.

New Orleans Mayor Mitch Landrieu’s office did not respond to emailed questions about the viability of such an effort, but Cantrell promised that her office would look into it.

“With the boom in technology, that’s low-hanging fruit,” Cantrell said. “That’s something we can stay on top of, and hopefully we can get a system as robust as that.”

The meeting also included discussion by Cantrell on a number of other projects her office is working on, and updates from Lori Wingate of the U.S. Army Corps of Engineers about the ongoing SELA projects. To read our live coverage of the meeting, see below.