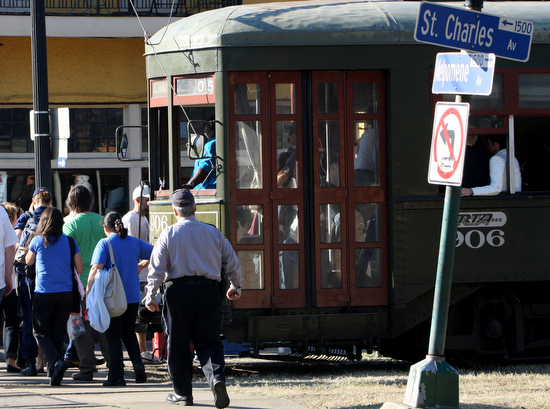 Passengers transfer from a shuttle bus on Melpomene Avenue to a streetcar on St. Charles Avenue during road construction in 2010. (UptownMessenger.com file photo by Sabree Hill)

Streetcar service through the Uptown area will be interrupted in three phases over the summer in order to accommodate the SELA drainage project, RTA officials told Carrollton residents on Monday night.

The first phase of interruptions will run from May 31 to July 11. The streetcars will operate between Canal Street and Erato Street, but from Erato Street to Webster Street there will be buses. From Webster Street to Carrolton and Claiborne, the streetcar will continue to run, said Gerard Guter, director of transportation at of the New Orleans RTA.

“Through the three months of this project, we will keep the streetcar running from Webster to Claiborne,” Guter said.

The second phase of interruptions will be from July 12 to Aug. 8.

“In that phase we are going to run buses from Canal street to Webster street,” Guter said. “When the bus gets to Webster, passengers will have the option of staying on the bus to Carrollton and Claiborne, or getting off at Webster if you want to continue to ride on the streetcar into Carrolton and Claiborne area.”

According to RTA, the third phase will return to the same configuration as the first — with streetcars resuming service between Canal and Erato — and will last from Aug. 8 to Sept. 5.

“That’s the way we will operate through these three months,” Guter said. “It’s an inconvenience to the RTA as well as the community. SELA worked to schedule around this and that’s the reason that we are operating in this fashion.”

The buses used on the routes will be the standard 40-foot buses and the same fare of $1.25 will apply.

Each of the contractors know the work they have to do in a short amount of time, said Joe Becker, general superintendent of the Sewerage & Water Board.

“The contractors at each one of those locations has got 90 days to move through the intersection and be able to get that intersection back open again,” Becker said.

The Department of Public Works picked the time frames for the interruptions and the Sewerage and Water Board coordinated the dates into the construction plans, Becker said, that so the contractors would know what is expected.

“We put the time frame in the construction contract so that they knew what they would be asked to do in terms of getting our work completed. They have committed to very aggressive schedules to move forward with that,” Becker said.

According to Fogarty, Phase 1 of the construction on S. Claiborne Avenue which stretches from Monticello Avenue to Leonidas Street is 70 percent complete, while Phase 2, from Leonidas Street to Lowerline Street is 73 percent complete. Phase 1 of S. Claiborne is estimated to be completed by Spring 2016 and Phase 2 is estimated to be complete by Winter 2016, according to Fogarty.

See live coverage below for more: