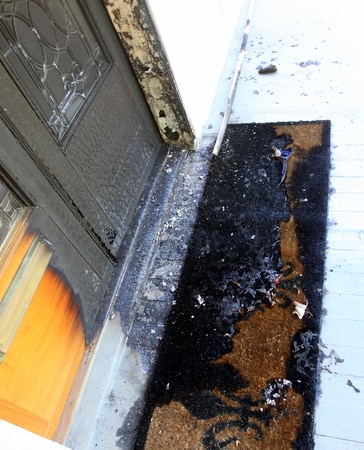 The front door of a home in the 2300 block of Octavia Street remains charred on Tuesday afternoon, with tatters of the American flag that was also burned. (Robert Morris, UptownMessenger.com)

Shreds of charred red, white and blue fabric still sat on the scorched doorstep of an Octavia Street home on Tuesday afternoon, after a fire apparently started on an American flag temporarily displaced the family from their home and left neighbors both baffled and disturbed.

The flag had been left on its flagpole overnight on the front porch at the house in the 2300 block of Octavia, but the residents awoke around 3 a.m. to find it placed on their doormat and on fire, said a neighbor who asked not to be identified.

The blaze spread to the doorframe before firefighters arrived to extinguished it, leaving the front of the house with damage from the flames, from the smoke inside and the water, she said. The damage and mess was too severe for them stay in the house afterward, the neighbor said.

Another neighbor’s surveillance video caught an image of a lone individual in the block around the time of the fire, the woman said. That video has been turned over to the New Orleans Police Department, and NOPD Second District Commander Paul Noel said on Tuesday afternoon that detectives have a lead on his identity as they investigate with New Orleans Fire Department arson investigators.

The neighbors don’t believe the arsonist was trying to harm them or damage the house, said the neighbor. Instead, the flag itself seems to have been the target, likely as part of a poorly-thought-out prank or political statement.

“I think it was definitely targeted to the flag, because he had leaned it up against the house and set it on fire,” she said.

While flag burning has long been a Supreme Court-protected expression of the right to free speech, the flag has recently become a flashpoint in protests over race relations stemming from an incident at Valdosta State University in Georgia. On April 24, self-described “terrorist against white people” Eric Sheppard was among protestors stepping on the flag, and Navy veteran and Playboy model Michelle Manhart tried to take it away. Manhart was handcuffed, arrested and charged with trespassing, Sheppard was later linked to a gun found in a backpack on campus and a warrant was issued for his arrest, and the university canceled classes amid the uproar.

Regardless of the Octavia Street arsonist’s motivation, neighbors remain troubled about how far beyond a mere prank or statement Tuesday night’s fire could have become.

“I think they just had an American flag up, and this guy saw it, and was like, ‘I want to do the movement,'” the neighbor said. “I personally don’t think he weighed the consequences that the whole house could have gone up in smoke, and he could have killed four people.”