A rendering by Garrity Accardo architects of the redevelopment along Freret near Cadiz. (via nola.gov) 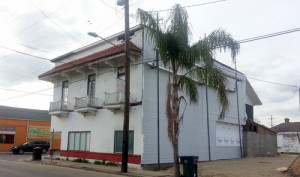 The new owners of the former Frank’s Steakhouse have revealed some details of the tenants they have lined up for their redevelopment on Freret Street — including a yogurt shop, a wine bar, a juice bar and professional offices — as nearby residents begin discussing the impact of the new apartments planned for the site.

The first-floor commercial space planned for the Freret Street side of the development is now 70 percent leased, said developer Arnold Kirschman said at a recent meeting with neighbors. While it is too early for him to begin naming individual business names and owners, one will be a wine bar that serves some food, he said. The yogurt shop will be the only chain businesss, though it will be owned by a local franchisee, Kirschman said.

There will also be a juice bar, Kirschman said, and a number of local professional services that are not food related. He said he and his wife, Rachel, are excited about the lineup so far.

Freret residents have largely welcomed Kirschman’s purchase of the property — which lay unused for years — and supported his request to demolish much of it, while saving the old laundry building. The upper floors of the buildings will have two floors of apartment units. 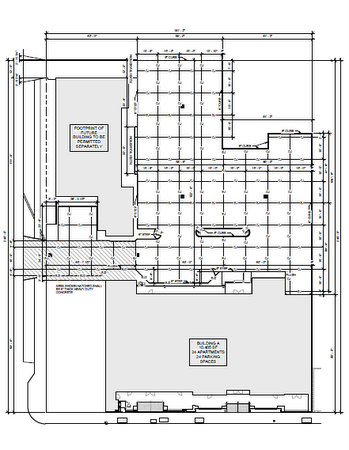 A site plan for the new development, showing the new building next to the laundry on Freret, and a new apartment structure on Cadiz. (via nola.gov)

One element of the Kirschmans’ plan, however — a new apartment building to replace two shotgun doubles on the Cadiz Street side of the property — drew a number of questions during the Thursday afternoon meeting at the Publiq House, directly across from the new development.

The Kirschmans said that their original intent was to move the old shotguns, but their condition is too far deteriorated to salvage — termite inspectors even refused to go under the houses. They have looked in vain for other solutions, they said, such as donating them to anyone who wants to move them, but so far have found no takers.

“When we met with the Barrecas, our full and whole intention was to renovate everything that was there,” said Rachel Kirschman. “But the buildings were empty for so long and so deteriorated that we didn’t have that choice.”

They need the additional residential density on Cadiz Street, they said, to help financially support the relatively low, three-story frontage on Freret.

With the increased density, many residents are worried about the traffic and parking, said Kellie Grengs of Freret Street. Juan Winsey, who lives directly across Cadiz Street from the proposed building, said he expects college students sharing apartments to increase the volume of traffic even more.

“The juniors, seniors, graduate students — I already know they’re coming,” Winsey said. “When I leave for work, people are waiting to park at my front door.”

The Kirschmans said they already own residential units all over the city, and they have very low turnover at their properties — college students, Arnold Kirschman said, are “not our target audience.” Further, the the spaces they have provided on the interior of the property exceed the amount required by the city.

“We put parking on the interior of the property because we thought it would alleviate traffic on Freret for the businesses,” said Rachel Kirschman.

Greg Ensslen, who has redeveloped a number of Freret properties himself, applauded many of the Kirschmans’ design choices, saying he would even be fine with less parking as more in keeping with a less car-oriented future for the city. But more broadly speaking, he said, the project’s number of apartment units may be too much for Freret.

“Is all this the right thing?” Ensslen encouraged the Kirschmans to continue asking. “Is there some reconfiguring of some things that can be done? Is this the right balance?”

Michelle Ingram of Zeus’ Place, also directly across Cadiz Street, asked the Kirschmans to explore fewer, larger residential units inside the property that will appeal to more families rather than individual renters.

“I think you are going bigger than what our neighborhood can support,” Ingram said.

While she couldn’t promise any individual changes, Rachel Kirschman said those considerations were the reason they wanted to meet with neighbors.

“You have our word that we will revisit the topic,” she said. “We will sit down and see what we can do.”

Amy Batiste, the CEO of Neighborhood Housing Services, asked the Kirschmans what they plan to charge in rent. High rent, she said, is likely to have the most significant effect on the neighborhood, by driving prices up nearby and pushing long-time residents out.

“I just think you have to be very intentional about understanding the neighborhood and the culture of the neighborhood, and having a great mix,” Batiste said. “We want to see our neighborhood thrive. We just want a great, wholesome mix.”

Those prices have not yet been set, the Kirschmans said.

The Kirschmans hope to begin pile driving on the property in early May, and anticipate about 10 months of construction, they said. If all goes smoothly, they hope to open the property some time in early 2016.

Another rendering of the Freret block face. (via nola.gov)