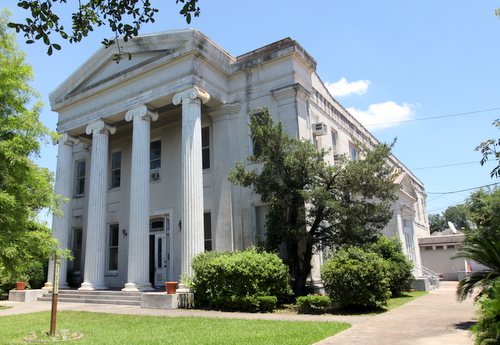 The Orleans Parish School Board may postpone the planned auction of the historic Carrollton courthouse to give neighborhood activists time to research other options for it.

The decrepit, 160-year-old building has been vacant since Audubon Charter School moved out of it last year, and the Orleans Parish School Board placed it on their surplus property list afterward. As state law requires of other properties owned by the school board, it was offered to charter operators first, but no takers emerged.

Since that time, neighborhood activists have been organizing to try to have a hand in the building’s future, especially as school officials began discussing a possible auction date in May. Last week, School Board member Woody Koppel met with the Carrollton-Riverbend Neighborhood Association, and said the board may be willing to postpone the auction until the end of the year in order to hear what kind of concrete proposals the group can develop.

Keith Hardie, a preservation advocate and member of the nearby Maple Area Residents Inc., is assembling a “tight” proposal outlining what steps the neighborhood will pursue over that time, Koppel said. Koppel will then present Hardie’s proposal for the delay to the full school board for approval, he said.

“Hopefully we’ll come up with something great at the end of six months,” Koppel said.

One such option would be for another governmental entity to come up with a use for the building, Koppel said, in which case some sort of land swap might be available. But otherwise, the school board needs to dispose of the property, mostly because of the expense of maintaining it, he said.

“There is a true cost to school board owning that property,” Koppel said. “At the end of six months, we hope to have a definitive answer of what we’re going to do with it.”

A group called the P-Town project had made a similar request last year prior to the sale of the old Priestley building on Leonidas Street to the Lycee Francais charter school. The difference in this case, Koppel said, is the law places school uses ahead of any other uses for surplus property the school board owns.

“It is currently not being used as a school, and we do not intend to use it as a school,” Koppel said.

Carrollton resident and former City Council candidate Drew Ward, one of the activists organizing around the courthouse, said he believes the best use of it is for some sort of museum about the history of New Orleans but primarily targeted toward locals — for example, showcasing the history of the city’s drainage or streetcar systems.

“I feel that this is our chance to get something back that we’ve lost,” Ward said. “If it’s another condo development, we get to spend the next 20 years driving by a condo.”

On the other hand, Ward said, no governmental entity may be found to take up such a project in six months. Even so, that time would give residents the opportunity to discuss what possible futures they would be willing to support from private developers. Any change to the use of the building will likely require some sort of governmental approvals, so an idea of what the neighborhood would accept ahead of time could influence potential bidders at auction, Ward suggested.

“People seem ready now to have that conversation that we probably should have had two years ago,” Ward said.