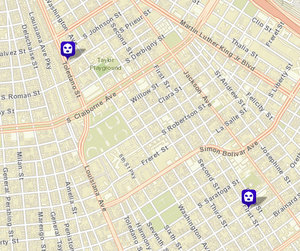 One man was robbed by a shotgun-wielding assailant on First Street in Central City late Thursday night, and another was carjacked minutes later on Toledano Street, New Orleans police said.

At 11:25 p.m., a man in his late 30s was in the 1800 block of First Street (near Dryades) when he was confronted by a masked assailant with a shotgun who demanded his belongings, according to the initial NOPD report. After he handed it over, the man with the shotgun got back in his vehicle and left, the report states.

At 11:34 p.m., another man in his early 50s was retrieving items from a vehicle in the 3200 block of Toledano (near South Prieur) when a maroon vehicle drove up, the reports state. A man with a shotgun got out, took money from the victim’s pocket and then left in the victim’s vehicle, the report states.

One thought on “Robbery reported on First Street, carjacking on Toledano in Central City”