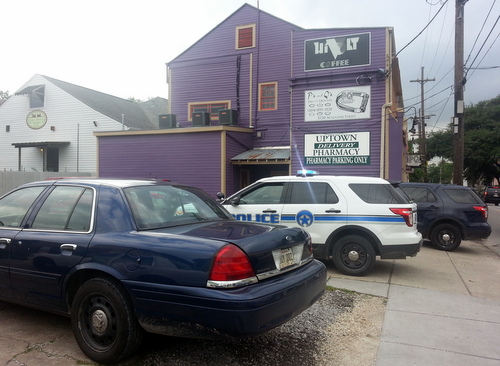 A pharmacy at Nashville Avenue and Magazine Street that was open in spite of the power outage following Monday’s storms in New Orleans was robbed at gunpoint of cash and painkillers by three masked men on Tuesday afternoon, police and the victims said.

Uptown Pharmacy owner Elaine Nicoll said she hadn’t initially wanted to open for business Tuesday as power remained out in the corner of Uptown between Audubon Park and Jefferson Avenue, but felt compelled to because of her customers’ needs.

“We have to, because of the fact that you’re dealing with people’s medications,” Nicoll said. “By all rights, we should have been closed.”

Shortly before 4 p.m., three men walked into the pharmacy quickly, each heading down a separate aisle to confront her and an employee at the cash register, and then a pharmacist in the back, Nicoll said. All three had guns, and after robbing the register of all its cash, one jumped the counter and demanded the painkillers from the racks, filling up a bag with the drugs, she said.

“He took every cent of money we had in the register,” she said. “He said, ‘Give me all your drugs,’ and she just started dumping what they wanted. They took quite a bit.”

All three men were dressed in black and were wearing masks that covered most of their faces except for their eyes, she said. She couldn’t tell if any of their clothing had any distinctive markings on it, she said, because she was focused on the gun.

“I just know they were in black,” Nicoll said. “I was just looking at that gun, thinking, ‘This is going to be it.'”

Because power was out, the normally busy intersection had far fewer people nearby than it usually would. Most of the surrounding businesses were closed, and construction was halted on the new restaurant across the street, so no workers were there either.

Further, the lack of power kept security cameras down — possibly creating the opportunity for the robbery in the first place, Nicoll said. In fact, the power returned while the men were still in the store, prompting them to leave quickly.

“The power coming on must have spooked them,” said Sgt. Jennifer Dupree of the NOPD Second District investigations unit. “It came one while they were inside.”

The robbery was the second at a pharmacy in the Uptown area reported Tuesday. Around 11 a.m., two armed men entered the Med-Pro Pharmacy at 2600 South Claiborne Avenue, “jumped over the counter and fled with prescription medication,” according to the report in that case.

The Uptown Pharmacy robbery was actually paged out while detectives were meeting for their weekly review of major crimes at the NOPD Second District station, and Dupree and NOPD Commander Paul Noel were discussing an ongoing rash of armed robberies in the Carrollton area. The two latest robberies reported early Sunday are believed to be connected to a set of four from earlier this month, and investigators are working active leads on the cases, Dupree reported.

“Everything we have needs to be devoted to catching these guys,” Noel told his officers.

Nicoll said she has operated Uptown Pharmacy at the corner of Nashville and Magazine since 1989, but Tuesday was the first time she had ever been robbed at gunpoint. Prior to Tuesday, the worst crime she’d experienced there was someone stealing all the nicotine patches off the counter.

“I’ve never experienced anything like that in my life,” Nicoll said. “I guess I’ll have nightmares of this. I’ll want to keep the doors locked now for a while.”

Police do not yet know which direction the gunmen approached from or where they fled, but they are asking anyone in the area who has a camera that was working to review their footage from Tuesday afternoon for any leads that could be helpful. Anyone who saw anything unusual is urged to call the NOPD Second District station at 658-6020 to speak to a detective, or CrimeStoppers at 822-1111 to leave an anonymous tip that could be eligible for a cash reward.

[Note: This article was first published at 5:57 p.m. Tuesday, and updated Wednesday morning with details about the South Claiborne robbery.]

One thought on “Pharmacy on Magazine robbed at gunpoint during power outage, police say”