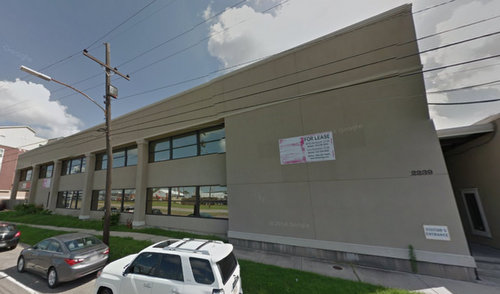 The building at 2239 Poydras Street, photographed in June 2014. (via Google Maps)

Since opening its doors in fall 2011 with about 130 students, the French-curriculum charter school has grown to 465 students this year, and will surge to approximately 580 next year with the addition of new students in the kindergarten and preschool. That net growth will continue by an average of more than 80 students per year until the current fourth graders graduate from high school in 2022-23, according to projections by the school, making the addition of classroom space an ongoing necessity.

For the upcoming 2015-16 school year, Lycee will need three more classrooms than it currently has at its three campuses: the main campus at Patton Street and next door at St. Paul’s Episcopal church, plus the preschool campus at First Presbyterian Church on South Claiborne. The following year, Lycee will need an additional seven classrooms, said board member Erin Greenwald, who has been researching the space issue as chair of the school board’s facilities committee.

The final option, Greenwald said, would likely provide the best educational experience for Lycee students, because it would consolidate the school into two places. But it is also the most costly, requiring the school to maintain the St. Paul’s lease and rent more on Poydras than it needs for several years, and would actually exceed the current revenue projections for the coming year.

Looming over the discussion was the pending purchase of the former Priestley school in west Carrollton. While its renovation is expected to take years, the committee gave some thought to a “modular village” on the large school grounds there in the interim — an option CEO Keith Bartlett said he somewhat favored, because it would allow the school to begin establishing a presence in that neighborhood. Greenwald said the committee feared that many parents would reject the notion of sending their children to class at an active construction site, however.

Likewise, Greenwald said a drawback of choosing an option that only covers the 2015-16 school year is that the urgency of the classroom-space search saps so much attention from the board that it could actually draw focus away from the Priestley project.

“Space is a crisis for a lot of charter schools,” said Lycee board chair Alysson Mills. “Access to a building that doesn’t need work is a big deal.”

Thus, Greenwald said her personal recommendation was for the second option — keeping the current configuration the same, but renting the first floor at Poydras for the school’s older students.

The discussion drew the participation of about 10 parents in the audience. Several expressed concerns about security at the Poydras Street site, since the school will not have control over who rents the second floor.

“I am still concerned about adults who we don’t know sharing the building with our children,” said parent Mary Dwyer.

The first and second floors have separate entrances and exits, so there would be no mixing of the tenants, Greenwald said. Other board members expressed confidence that Bartlett would be able to implement a security plan that keeps the students safe, since that was among his first priorities at the Patton Street campus.

The major hospital construction projects around the Poydras site were also a concern for parents, but Greenwald said that they were scheduled to be completed soon. Committee members noted that administrators at Morris Jeff had praised the building from their time there.

Other parents said they liked that the Poydras site was so centrally located in the city, near the interstate system. A map created by the facilities committee showed that about a third of Lycee families (36 percent) live in the Uptown ZIP codes of 70115 and 70118, but the rest are spread all over the city and even a number of other parishes.

At the conclusion of about an hour’s discussion, the board voted unanimously to authorize Bartlett to proceed with the Poydras lease, with the stipulation that it must contain assurances about the safety that satisfy him.

“I think the Poydras building is a good building,” Bartlett said. “I wish it had more green space, but we can make that building work.”

In other news, the Louisiana Department of Education has certified Lycee as an official immersion school, Bartlett said. Development director Sarah Stickney is leaving the school after its L’Extravagance fundraiser on April 19 for a job at Tulane University, so that position will be advertised and filled as quickly as possible, she said.