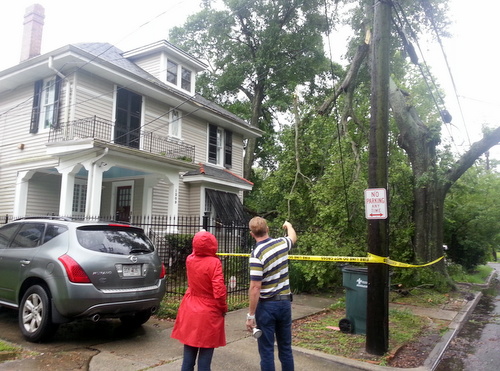 A homeowner in the 1200 block of Lowerline examines a power line pulled down by a falling tree branch in his front yard during Monday morning’s storms. (Robert Morris, UptownMessenger.com) 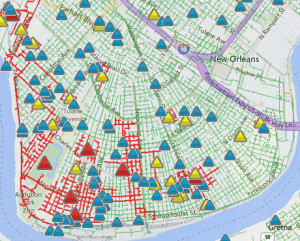 More than 11,000 New Orleans homes and businesses remain without power as the sun sets Monday evening, and some of those could last as long as Wednesday, though 400 more workers are en route to the city from Baton Route to aid with the recovery, Entergy officials said.

Monday morning’s strong storms started in Texas and moved across Louisiana from one state line to the other, knocking out power to more than 160,000 customers at its peak, said Melonie Stewart, Entergy’s director of customer service. That figure was as high as 50,000 customers in the New Orleans metropolitan area, Stewart said, and 12,000 in Orleans Parish alone.

As Monday night fell, the 800 Entergy workers and contractors were beginning to restore service on minimally affected lines, Stewart said.

“We are bringing those numbers down,” Stewart said.

Entergy is also bringing in 400 additional workers from Baton Rouge, and expect the majority of customers to have power back by Tuesday, Stewart said. Repairs on lines that suffered the heaviest damage may take until Wednesday, and those scattered throughout the city, Stewart said, so no list of them is readily available.

The National Weather Service warns of a “slight risk” of additional strong storms Monday night and Tuesday morning, which could also produce hail, lightning, and torrential rainfall. Stewart said that the best way to stay abreast of the schedule for restoring power is the Entergy app for smartphones, which has parish-by-parish updates now that will be upgraded to neighborhood-level updates by Tuesday.