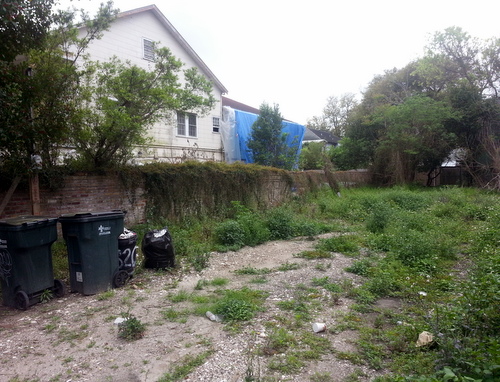 The vacant lot at 820 General Pershing was overgrown and littered when photographed in late March. The rectory, under renovation next door, can be seen behind the wall. (Robert Morris, UptownMessenger.com)

The vacant site of a century-old home on General Pershing Street — demolished last year despite sustained outcry from its neighbors — may finally see some use this fall as green space for the nearby Ecole Bilingue de la Nouvelle-Orléans.

Neighbors who live around the former house at 820 General Pershing began fighting for its preservation in 2012, concerned that it would become a parking lot for the businesses fronting on Magazine and represent commercial encroachment into the neighborhood. The repeated requests by successive owners to demolish it were initially unsuccessful, though it remained blighted and empty during that time. 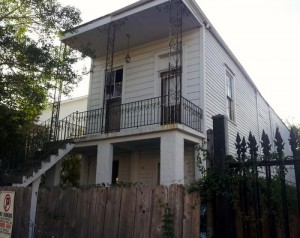 In 2014, however, the site became an early flashpoint in the debates over preservation and demolition that are now flaring up at the New Orleans City Council with increasing frequency, and it was approved to be torn down in September 2014 in a vote led by City Councilwoman LaToya Cantrell. Attorneys for the Metairie-based owner (Triton Holdings Two LLC) were met with skepticism when they told city officials that the lot was to be used for a “private garden.” Cantrell granted the demolition anyway, in part based on a “good neighbor agreement” to be signed with neighbors that required the lot to be fenced, among other requirements. (Based on the condition of the lot today, however, it is unclear which of those requirements were fulfilled or whether any gardening ever took place there following the demolition.)

Now, the lot appears to have a new owner, 628 Gov. Nicholls LLC, and a new plan for its future. Andrew Lapeyre, board chair of the private French-immersion school Ecole Bilingue de la Nouvelle-Orléans, recently confirmed that the school has been granted the use of the lot as a green space.

“We’ve been fortunate that an anonymous benefactor has donated the use of the space to the school,” Lapeyre said.

Last summer — before the 820 General Pershing controversy reached the City Council — the school received permission to renovate the former St. Henry’s rectory at 812 General Pershing for classrooms and office space. That rectory renovation project — which will be renamed Fabian Hall, in honor of school founder Julie Fabian — is “not exactly an expansion,” Lapeyre noted, but “more to spread us out” from the main building across the street.

The exact use of the vacant lot at 820 General Pershing hasn’t been precisely determined, Lapeyre said. The school provides a number of ecological awareness and hands-on learning experiences at the main campus, but the grounds there are mostly concrete and asphalt.

“Since we don’t have a green space, this will be a new opportunity for us,” Lapeyre said.

Fabian Hall will be open in time for the next school year, Lapeyre said, and the green space next door should be ready by then as well.

Neighbors have been generally supportive of Ecole Bilingue’s plans for the rectory, and offered little opposition to the green space when recently contacted about it. They noted, however, that it remains a dramatically different outcome than was promised to allow the controversial demolition.

“While Ecole is a good neighbor and far less invasive then other uses we hoped to protect against, I wonder if this residential zoned lot can be used for a playground,” said nearby neighbor Faye Lieder in an email to Uptown Messenger. “The GNA does state that any zoning change requires approval of the [Faubourg Marengo] neighborhood association.”