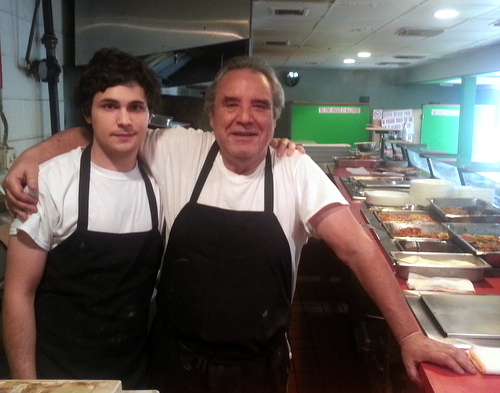 Chef Antonino “Nino” Bongiorno and his son, Giuseppe, behind the counter at Cafe Nino. The restaurant will close May 31. (Robert Morris, UptownMessenger.com)

After 18 years in an assuming little building on South Carrollton Avenue, chef “Nino” Bongiorno plans to close his doors there for the final time at the end of next month.

“Everyone knows me, and everyone cries,” Bongiorno said of word about his plans to close getting out. But fans of Nino’s chicken marsala and red wine still have reason to dry their eyes — Bongiorno said that after a short break, he plans to currently seek a new location in the Warehouse District or possibly Freret Street.

A number of factors led to Bongiorno’s decision to close his doors. For one, the 70-year-old said he needs to return home to Messina on the Italian island of Sicily, where his parents are still living. For another, he said, the condition of the building he has leased for nearly two decades is now making it more difficult to attract new customers. With a newer location — his first choice is the Warehouse District, though he also loves Freret Street — and his ardent following, “they will be lining up out the door,” he said with gusto.

Bongiorno made his way from Italy to America in 1970, landing in New York with his first wife. In 1986, he moved to New Orleans, and bought into the Scotto franchise of Italian eateries with a location in the Riverwalk. After nine years there, the rent was poised to double, and Bongiorno left for Uptown to the building that has borne his name since then.

It is hard to say whether Bongiorno’s reputation based more on his food or his hospitality, though he is certainly beloved for both. The faded menu offers a heavy plate featuring both an entree of veal, fish or chicken and a side pasta for a stubborn $9.45, and when Bongiorno is present, he often invites diners to enjoy a glass of wine on the house.

Bongiorno said he has been living in the Warehouse District for 30 years, and often thought of moving his business closer to his home — he even had a location picked out in 2005, but Hurricane Katrina scuttled that plan. After a lifetime of moving, he said, departing from Carrollton on May 31 may be sad, but it won’t be the end.

“I’m an old man, but I still get new energy,” Bongiorno said. “A sip of wine will do that.” 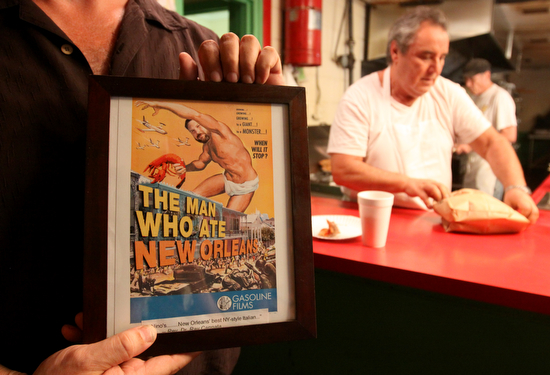 Ray Cannata holds a poster for “The Man Who Ate New Orleans,” a Gasoline Films/Paste production at Cafe Nino while owner Nino Bongiorno works behind him. (UptownMessenger.com file photo by Sabree Hill)

Among Cafe Nino’s most ardent champions is the Rev. Ray Cannata, pastor of Redeemer Presbyterian Church — even filming part of part of a 2010 documentary about eating in New Orleans at Cafe Nino. As news began to spread that Nino was closing, Cannata was among those most loudly sounding his laments. Cannata shares his ode to the restaurant below:

I had just moved to New Orleans, three months after Katrina. I was the new pastor of Redeemer Presbyterian on St. Charles in Uptown. It was my first week and most things on Carrollton near Riverbend were still closed after dark. I dropped into Cafe Nino’s more to fuel up than to enjoy a great meal. Sure, New Orleans had the best food in the world, but as a lifelong New York Italian, I didn’t expect to be impressed here with that specific food genre. Nino’s wasn’t much to look at — tattered banner for a sign, giant potholes in the driveway, chipped red, green and white paint, dimly lit.

But as soon as I heard the Messina-music of Nino Bongiorno’s voice, stole a look at the utterly gorgeous chicken parm, smelled the red sauce — I knew. As I began to chip away at the volcanic mound of awesome on my styrofoam plate, I quickly slipped into a food trance. There in the empty restaurant, I developed tunnel vision. I could see, smell and taste nothing but the plate before me. I don’t know if it was minutes or hours, but as I began to arise from my euphoric coma, I looked to the side and noticed Nino staring at me with his enormous grin, cigarette dangling from his mouth. He knew.

I went up to pay and Nino fished for the compliment I was eager to offer. “Feel-a better now, my friend” “Oh, yeaaah, pisan!” “You need-a little something for your digestion?” I thought he meant maybe a Tums or Maalox, so I politely turned him down. But he insisted, and when I relented I learned the medicine he had in mind.

He filled the complementary 16 oz go-cup to the brim with chianti. I thought — “Man, Redeemer Church and Nino’s — we both give the wine out for free. But at my church it is in a thimble-sized vessel.” I knew right then — I wanted Redeemer Church to be more like Nino! This city, and its best people like Nino, has a lot to teach me about what it means to live life to overflow for God’s glory and people’s good. After all Jesus’ first miracle was to make 175 bottles of wine out of water at a party where they had already run out. It hit me then — I want Redeemer to be a ‘go-cup’ kind of church!”

Nino has been my friend and tutor ever since. And his food has been my comfort and medicine. There’s no emotional injury, no crisis I’ve found that the healing powers of Nino and his veal can’t treat. I can’t imagine this city without him.

When I shared the news of Nino’s imminent closing, an ex-New Yorker declared that this marked the death of an era. I joked that I would forever mark time as “Nino” and “Post-Nino.” In the past nine years our endlessly creative city has birthed several other awesome Italian joints — Pizza Delicious comes to mind, and more recently Cibo, just a few blocks down Carrollton. These and others are very authentic New York, and may even rival Nino’s food in terms of taste. They may not offer you half a bottle of free chianti on your way out, but they do have larger menus and keep far tidier restrooms. But they can’t possibly substitute. I’ll try to soldier on without Nino’s medicine for my soul, aspiring to learn what it means to live the New Orleans go-cup kind of life. 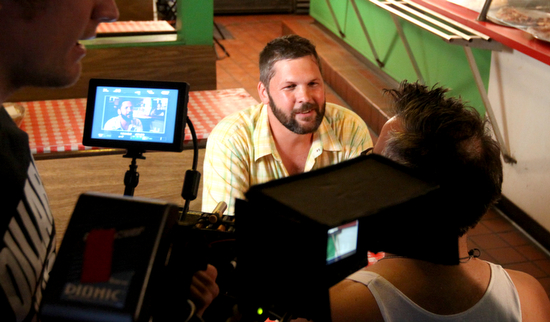 Ray Cannata is interviewed for a scene in the documentary “The Man Who Ate New Orleans,” at Cafe Nino in October 2010. (UptownMessenger.com file photo by Sabree Hill)