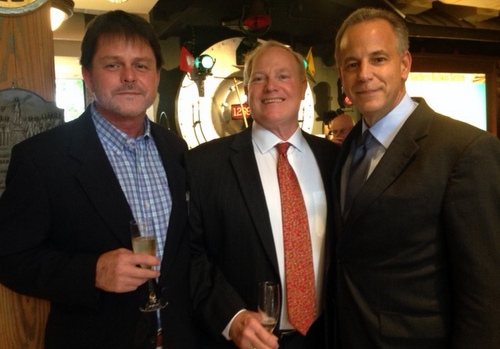 Public Service Commissioner and gubernatorial candidate Scott Angelle (at right) is joined by Phil Nugent (left) and Bob Edmundson at a recent campaign event in New Orleans. (photo by Danae Columbus for UptownMessenger.com)

As Acadiana-based gubernational candidate and Public Service Commissioner Scott Angelle made the rounds at a Cajun Fais Do Do held in his honor last night in New Orleans, he reminded the close to 100 attendees that Louisiana voters have a history of electing governors who hail from Acadiana — Edwin Edwards and Kathleen Blanco — and that several of our recent governors — Mike Foster and Buddy Roemer — were early dark horses.

One of nine children whose father headed up the state’s Wildlife and Fisheries department and passed down his passion for the environment, Angelle was quick to differentiate himself from front-runner U.S. Senator David Vitter and his old boss Bobby Jindal.

Angelle is promoting himself as a populist; a bottom-up (not top-down) politician who believes that legislators have earned the right to be equal partners in government and who will listen to the needs of everyday citizens. “I’ll be someone you and your family can come to with your problems,” Angelle said.

Angelle started out as a problem-solving Democratic local elected official in St. Martin Parish at the age of 25, then rose to Parish President before joining Kathleen Blanco’s staff as head of the Department of Natural Resources. He became a Republican when appointed Lt. Governor by Bobby Jindal (replacing then Lt. Governor Mitch Landrieu when he was elected mayor of New Orleans) and subsequently won the PSC election. A close friend is Acadiana bank president and state Sen. Fred Mills.

“No one person has a monopoly on good ideas,” explained Angelle. Even though Louisiana is faced with a $1.6 Billion deficit (“something’s terribly wrong in the home office”), Angelle thinks the best days for New Orleans and Louisiana are still to come.

Angelle believes that job creation and workforce development are keys to Louisiana’s future. “We need more people pulling the wagon and less riding it,” he said. Angelle also believes that all children deserve the best education possible “regardless of their zip code.” Angelle opposes the ongoing cuts to higher education and explained “higher ed should not be an after-thought.” He also believes that Louisiana’s many tax exemptions should be reevaluated. “We can do a better job determining who deserves exemptions and must get a better return for the money – your money.”

Angelle, who hails from a large, Catholic pro-life family, says that electing a governor is more than just agreeing with a candidate on policy but agreeing on how he or she treats people. “I’m more interested in our house than the White House.”

Angelle says he has now moving his campaign to the New Orleans and Shreveport media markets. “You’ll see me so much in New Orleans, you’ll think I moved here.” Angelle has already had one breakfast with members of New Orleans’ African-American faith-based community coordinated by Bunny Charbonnet, an early Angelle supporter.

With the state legislature’s term-limits laws taking effect, there will be several legislative seats up for re-election in the fall including the Gentilly/Lakeview state senate seat currently occupied by Ed Murray. Already lining up for that race includes State Representative Wesley Bishop, whose state house district encompasses much of the senate district; African-American business consultant and first-time candidate R. Erich Caulfield; and Lakeview resident Col. Paul Decker, U.S. Marines (ret). Former Sheriff and Attorney General Charles Foti has also been eyeing the seat.

With most everyone’s attention focused on Jazz Fest, even we don’t see any enthusiasm for the two tax initiatives on the May 2 ballot. There’s no question that our public libraries need more funding but we wish that the library system had a long-term spending plan for the money.

We are also pleased that Sheriff Marlin Gusman has hired a new tough female corrections officer with consent decree experience in a major bad-ass jail like Chicago. Maybe things will eventually look up at the jail after all.