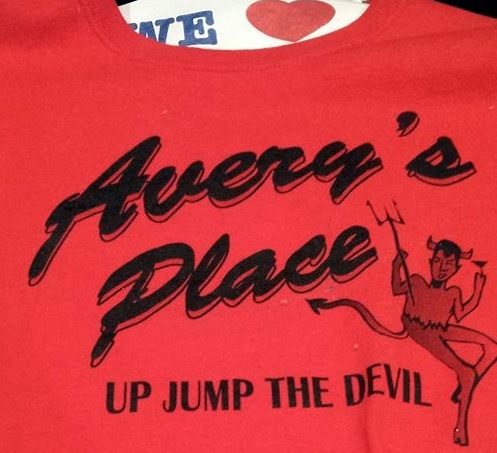 A T-shirt bearing the logo for Avery’s Place from a Facebook page used as evidence during a hearing before the city Alcohol Beverage Control board on Tuesday. (via facebook.com/avery.manuel.5)

The Alcohol Beverage Control board of New Orleans voted Tuesday afternoon to revoke the liquor license from Avery’s Place on Willow Street in west Carrollton, saying that the establishment’s namesake is actually an owner and a convicted felon and thus not allowed to operate a bar.

Karen Robinson took over the bar at 8838 Willow Street in July of last year, and formally bought the business from previous owner Ira Sandifer in November, she told the Alcohol Beverage Control board in a Tuesday afternoon hearing. She then named it “Avery’s Place,” after her long-time fiance Avery Manuel, who lives with her in Harvey and helps out around the bar in addition to his own day job, she said.

At a previous appearance before the alcohol board, however, Manuel said that he was an owner of the bar. Based on that, agents with the state Office of Alcohol and Tobacco Control and the Louisiana State Police began investigating the ownership of the establishment, according to testimony under questioning by assistant city attorney Dan Macnamara.

The agents found that while Manuel’s name was not listed on the registration documents with the state, his name was on the bank account associated with the bar. Further, Manuel represents himself publicly as Robinson’s husband, and state law regarding alcohol permits says that when a couple holds themselves as married, they should be treated as married in decisions about the permit.

The investigators also found that Manuel spent 10 years in prison from 2000 to 2010 on a conviction of possession of heroin and possession of a firearm by a convicted felon, and that he had a previous aggravated battery conviction. The violent crime conviction prevents Manuel from ever acquiring a state alcohol permit, Macnamara concluded.

Based on the fact that Manuel previously told the board he was an owner of the bar, Avery’s Place should not have a liquor license, said Commissioner Robert Jenkins. His motion to revoke the license quickly passed, 7-0.

The hearing drew no comments from the public in opposition to the bar, although Enrico Sterling of City Councilwoman Susan Guidry’s office said that the nearby residents who have complained to him said they were afraid to speak against it publicly.

A handful of supporters of Avery’s Place did show up, however. One woman criticized the people complaining about the bar as recent arrivals to the neighborhood who moved in next to a bar. Robinson, by contrast, has invested in the Carrollton neighborhood with the bar, the woman said.

“She’s done a great job at it. It’s our version of Cheers, where you walk in and everybody knows your name,” the woman said. “This is a witch hunt. I don’t know who’s after the property, but they’ll have hell to pay.”

One other pending issue before the alcohol board, charges against The Palms bar in the university area, were postponed until May. To read our live coverage of the meeting, see below.