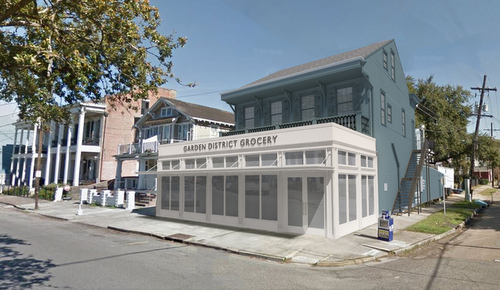 A rendering of the new glass-and-steel facade of the Garden District Grocery slated for the former location of Zara’s at 2042 Prytania. (by Lee Ledbetter, courtesy of the architect)

After its sale last year, the former Zara’s location on Prytania Street in the Lower Garden District will be dramatically renovated into a new, full-service Garden District Grocery, the property owners told neighbors on Monday.

Robby and Liz Blum bought the shuttered neighborhood grocery at 2042 Prytania and its adjoining rental units last summer, and now plan to renovate and reopen it with a more open-air design, Liz Blum told the Coliseum Square Association on Monday evening. The building itself is smaller than some other neighborhood groceries, so the couple plans to keep it from feeling cramped by stocking “three or four of everything you would ever need,” Blum said, rather than 50 brands of peanut butter.

The Garden District Grocery will place an emphasis on healthy food and also stock plenty of good wine, Blum said, as well as a few prepared foods. She noted that elderly residents of the neighborhood have stopped by and said they used to depend on Zara’s delivery, and Blum also hopes to provide baked chickens or other simple items for people stopping by to pick up dinner on the way home from work.

“It’s going to be upscale feeling, but we want to keep the price point affordable for everybody,” Blum said.

Architect Lee Ledbetter told the Coliseum Square Association that one inspiration for the new interior layout is the Dean & Deluca groceries based in Manhattan. The front facade will completely transformed from its current brick to mostly glass with steel columns, which will slightly wrap around the corner to Josephine Street as well.

“Rather than trying to make something that looks like it was built in 1860s, we’re responding to the spirit of that, the proportions of that,” Ledbetter said.

The couple is also renovating the apartments adjoining the grocery and in the house next door, though Blum said they may reduce the number of units as they reconsider the floor plan. Ledbetter said they still don’t have an opening date as they continue to obtain permits from the city; the project is set for approval Thursday by the Historic District Landmarks Commission.

“We all thought the project was really excellent,” said Wayne Troyer, an architect who serves with the HDLC and a member of the Coliseum Square Association.

One question from the Coliseum Square Association audience was why the name “Lower Garden District Grocery” wasn’t chosen. Ledbetter joked that he had been warned that might be an issue, then explained that both neighborhoods include “Garden District” in their names, and the goal was to be as inclusive and broadly appealing with the name as possible.

Later in the evening, the Coliseum Square Association voted in favor of voicing support for the project.

Liz and Robby Blum met in high school on the Mississippi Gulf Coast and moved to New Orleans in the late 1980s for college, Liz Blum said in an interview after the meeting. She is a mortgage banker at IberiaBank, and while Robby Blum was educated as an accountant, he shifted to historic renovation around Uptown New Orleans about 10 years ago. He is also a co-owner of NOLA Props, a prop house in New Orleans East where Hollywood productions rent items they need for movies filming in New Orleans — similar, Liz Blum said, to a ““grocery store for movie business.”

Liz Blum said her husband is also a talented cook — “I knew he was a keeper when I found out he could make roux,” she joked — and does all the cooking for events the couple organize. He may not be in the kitchen at the Garden District Grocery, Liz Blum said, but he will use some of his recipes there.

While the Garden District Grocery represents another new direction for the couple, Liz Blum said it is a project they plan to be involved in over the long-term.

“Every three years we do something that really scares us,” she said. “This is something we are passionate about. We don’t want to flip it. We want to own it.”