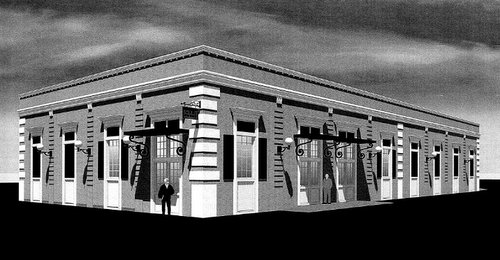 A revised rendering of the CVS proposed for Magazine and Louisiana included in documents provided to the city. (design by Linfield, Hunter and Junius architects)

City officials have given initial approval to a proposal to turn the shuttered Blockbuster Video and adjoining restaurants into a CVS pharmacy at the corner of the Garden District on Magazine street.

The project needs City Council approval not for a zoning change, but a conditional use to reunite all the floor space of the separate tenants in the building under a single roof — just as it had been in the past as an Eckerd’s Drug Store, said Mike Sherman, an attorney representing the developer last Tuesday (Feb. 24) before the City Planning Commission.

“We are not changing one inch of the footprint of this building,” Sherman said. “What we are doing is tremendously massive facade improvements that have been very well received.”

Not under consideration with the request was the sale of alcohol — which is already permitted at the location — but Sherman said CVS is committed to a good-neighbor agreement with residents governing how it will be sold. That agreement should be in place before the proposal reaches the City Council, Sherman said.

Residents were not keen on the idea of another chain pharmacy on the celebrated local shopping district when developers met with them in December, but acknowledged there was likely little they could do about it. They had a number of complaints about the design of the building at that time, and Sherman said the project is now on its fifth version of architectural drawings — including the addition of an entrance serving the sidewalk as well as the parking lot.

James Smoak of the Touro-Bouligny Neighborhood Association said many nearby residents remain against the CVS because of the alcohol issue. The Walgreens nearby on Magazine Street voluntarily agreed not to sell alcohol and have done fine for 20 years, residents pointed out.

“There’s substantial opposition to this,” Smoak said. “To have another alcohol-sales point in this neighborhood is sort of saturating this location. Anyone who wants alcohol from this location can go one or two blocks in either direction and get all the alcohol we need.”

Although CVS agreed close at 10 p.m. rather than stay open 24 hours, the location will still increase traffic to the busy corner, said Andre Gaudin, vice president of the Garden District Association. But the configuration of Louisiana Avenue’s turning lanes already leads to dangerous maneuvers by drivers trying to reach that parking lot, Gaudin said.

“Folks drive down that roadway backwards all the time,” Gaudin said. “I see that all the time.”

The CVS had a positive report from the city planning staff based on the site’s past history as a drug store and the 28 spaces in the attached parking lot. Commission chair Kelly Brown noted that any consolidation of the building into a single tenant will require this conditional use.

Commissioner Nolan Marshall III offered the motion to recommend in favor of the CVS, with both he and Commissioner Royce Duplessis saying that problems with alcohol sales are usually management issues that shouldn’t determine the zoning.

“The reasons for not wanting the alcohol could apply to any establishment along Magazine Street that sells alcohol,” Marshall said, likewise rejecting a suggestion that the Commission try to restrict the types of alcohol sold, such as single bottles of beer or malt liquor. “Alcohol is alcohol. Oftentimes when you distinguish like that, the goal is often to discourage a certain type of clientele — and I wouldn’t want to put a policy in place from this body that does that.”

The request was approved 6-0 by the City Planning Commission, and will head next to the City Council for final approval.