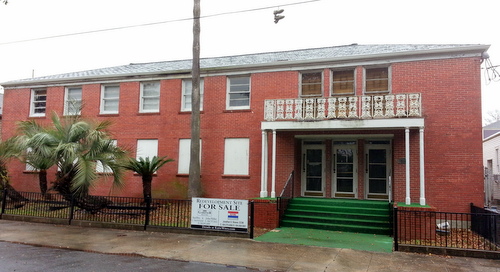 A century-old Baptist mission center in the Irish Channel that closed in 2010 is slated to become 10 condominiums in a redevelopment that is drawing praise from historic preservationists and neighborhood leaders but less enthusiasm from city planners.

The red-brick Rachel Sims Baptist Mission at 729 Second Street, facing Clay Square, was founded in 1910 and hosted summer camps and after-school tutoring programs until it closed in 2010. The property remains owned by New Orelans Baptist Ministries, according to city records, but developer Peter Gardner has a contract to buy the 10,000-square-foot building and convert its rooms into 10 apartments and condos, he said in a letter to neighbors.

The development will need a Residential Planned Community overlay in order to comply with the zoning at the site, so the project is on the agenda for this week’s meeting of the City Planning Commission. The city planning is recommending denial of the request, however, because the estimated 1,071 square feet per unit is smaller than allowed, resulting in density that is too high and thus likely to produce “levels of noise, traffic and activity … significantly greater than those produced by nearby residences.”

Gardner held a meeting for neighbors at the site Jan. 6, then attended a meeting of the Irish Channel Neighborhood Association on Jan. 8. Most of residents’ concerns were about quality-of-life issues relating to density at the site as well, according to his report on the meetings. His reply was that the 10 units fit “comfortably” in the floor plan of the building, that some of the units will likely be purchased as second-homes and thus not always occupied, and that its frontage on the park reduces the street density anyway.

If neighbors strongly prefer condos in order to limit density, he would be happy to agree to that, Gardner told them. Subsequently, Irish Channel Neighborhood Association president Jeremy Smith wrote to the planning commission that they do not oppose the development, if it is limited to 10 condos with viable parking in the rear.

The mission started “as a backyard Bible club in 1910 … [and] began with the purchase of a house across from Clay Square Park,” according to a 2009 article in the Baptist Message newsletter. Because it is in a historic district, it would also be difficult to tear the building down, Gardner said.

Michelle Kimball of the Preservation Resource Center wrote to the city that the project instead functions as “an appropriate reuse of a contributing element of the historic district.”

“The building was evidently built in 1949, so it is historic, but not as historic as most other buildings in the Channel, but it still tells an important part of the story of the development of the neighborhood,” Kimball wrote.

Gardner estimates that renovations on the building will take about a year after city approval if it is received. The City Planning Commission meets at 1:30 p.m. Tuesday at City Hall, and their recommendation is subject to final approval by the City Council.