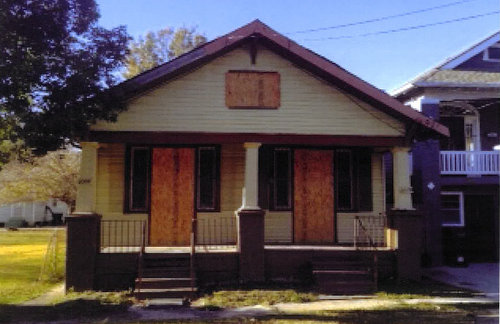 A photo of 3008 Lowerline Street included in city documents. (via nola.gov.)

A demolition request on Lowerline Street by St. Mary’s Dominican High School received approval from a split New Orleans City Council last week, reopening the debate about the role of historic preservation that has simmered between prominent members over the past year.

The request to tear down 3008 Lowerline Street had previously split the Neighborhood Conservation District Advisory Committee in a Jan. 5 meeting, records show, with a 5-4 vote that is technically a denial according to the committee’s rules. Last Thursday, City Councilwoman LaToya Cantrell introduced the issue with a motion in favor of the demolition, however, before allowing Councilwoman Stacy Head to speak on the issue.

“This is one of those situations because the requester is such a good actor,” Head said, opening her remarks. “Schools bring so much to our community, but they can also cause some real damage if the neighborhood is not engaged in their development plans.”

St. Mary’s Dominican High School already has an “incredibly large urban campus,” Head said, but it has no plan to redevelop the property, and instead will simply leave it as a green space, Head said. The house would have been salvageable, she said, and she opposed allowing it to be destroyed without a well-funded, certain plan in place and without sufficient engagement with the neighbors.

“At the end of the day, we’re going to be left with the jack-o-lantern effect because of what the school has chosen to do,” Head said. “Their actions, in fact, deteriorate the market value of the entire neighborhood. … In my opinion, this is a loss. This is a mistake.”

Cantrell, however, described the demolition as intended to remove a dangerous eyesore from the neighborhood. While Cantrell said she will continue working with the school to develop a master plan for its future growth, that should not be a requirement for getting rid of a property that the city’s code enforcement department has already tried to have demolished, Cantrell said.

“They are tired of living with blight,” Cantrell said. “It’s very difficult when you’re living in those environments to say your quality of life and your health is not put into jeopardy.”

Head and Cantrell were the only council members to speak on the Lowerline issue at Thursday’s meeting, but a similar debate engulfed nearly the whole council in September 2014. In that case, Councilwoman Susan Guidry insisted that a home on Joliet Street could be remediated and that allowing the demolition would reward the owners who had neglected it, while Councilwoman Nadine Ramsey countered that demands for preservation hastened the loss of property by longtime owners with less money for repairs.

Head cited Mid-City and the Climana neighborhood — between Freret and South Claiborne, Napoleon and Louisiana, near Broadmoor and Central City — as examples of places where mothballing historic homes rather than demolishing them has led to higher property values. She said a broader discussion of the issue is needed before the council’s housing committee, and asked Cantrell to bring experts who could support her perspective in favor of such demolitions.

“That is diametrically opposed to what I have both studied and seen,” Head said. “I would like to have that debate and an opportunity to have experts before us.”

The Lowerline property is more like Zion City in Gert Town and Hoffman Triangle in Central City than Climana or Mid-City, Cantrell countered. “Greening and cleaning” such lots is more appropriate for weak housing markets and actually improves values there, Cantrell said, adding that she’d be glad to bring in the experts from the Wharton School of Business who helped develop blight strategies in Broadmoor after the federal floods.

“We have to look at proper strategies for weak market areas,” Cantrell said. “These communities are not Climana. They are not along Freret Street, and so it will take different strategies to bring investment.”

The demolition request passed 4-2, with Councilwoman Susan Guidry joining Head in opposition to it.